A giant polar bear puppet the size of a double-decker bus has been installed by Greenpeace activists outside the Shell Centre on the South Bank. 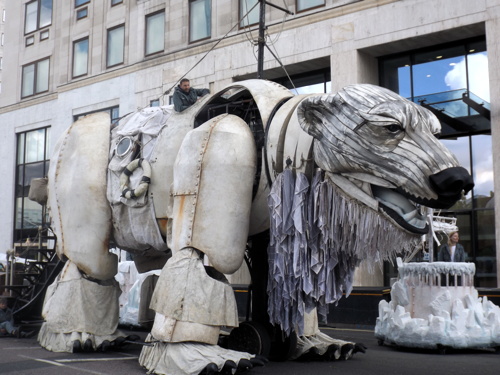 The stunt is part of Greenpeace's campaign against Shell's oil drilling in the Arctic.

The giant polar bear was wheeled into place early on Wednesday morning and could remain in Belvedere Road for several days.

Activists have chained themselves to the giant puppet and have enough food and water to last several days.

"I've been to the Arctic, I've seen the beauty, I've seen the wildlife, and my heart breaks to think that Shell is up there right now, drilling for the oil that threatens not only their habitat but ours," said actor Emma Thompson who joined the protest.

"Make no mistake about it, we're next. That's why I've come to their HQ. I'm here to say no. I'm here to say this has to end. I'm one of millions of people demanding that this company pulls out of the Arctic, and this huge polar bear is roaring with our voices."

Activist Patrick Earls added: "We're a determined bunch and spirits are high. It makes sense to me that this giant polar bear has come to London, because Arctic drilling affects all of us, not just the people who live in the Arctic.

"It's outrageous that a company headquartered in the UK is getting away with doing something this bad for the planet. I feel like because it's a UK company, we've got a big responsibility here to stop them."

The Greenpeace protest comes on the same day that the prices for some of the 800 new homes to be built as part of the Southbank Place development on the Shell Centre site have been announced.

Prices range from Ł540,000 for a studio to Ł685,000 for a one bedroom flat and Ł1 million for a two bedroom home. The official sales launch takes place later this month.

Bus route RV1 has been diverted away from Belvedere Road whilst the protest is under way.