Pupils from St George's Cathedral Primary School in Southwark visited City Hall on Tuesday to present Mayor of London Sadiq Khan with a letter calling for action to improve air quality in the capital. 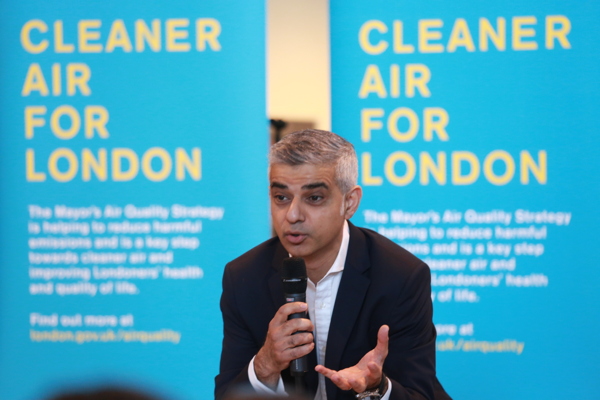 The headteachers of St George's Cathedral Catholic Primary School, Snowsfields Primary School and Spa School were among 100 London headteachers to sign a joint letter to Sadiq Khan which was presented to the Mayor on Tuesday morning.

The letter says: "On behalf of our children, we are calling on you to act on your promises and use all the powers you have to ensure that our children breathe safe clean air."

The missive concludes with this challenge to Mr Khan: "While some mayors may judge their period in office by the height of the buildings they saw built, we believe you can do something far bigger.

"If you reduce air pollution across a large swathe of the city, then long after your tenure has ended there will be generations of children who will live longer and healthier lives.

"That would be a greater monument to your mayoralty than any skyscraper could ever be."

Sadiq Khan said: "Every child deserves the right to breathe clean air in London and it is a shameful fact that more than 360 of our primary schools are in areas breaching legal pollution limits.

"Yesterday I was forced to issue the first 'very high' air pollution alert under my new comprehensive system, London's filthy air is a health crisis and our children are particularly vulnerable to the toxic effects of air pollution.

"This is why I'm doing everything in my power to safeguard Londoners' health and my new air quality audits are a strong step towards helping some of the most polluted schools in London identify effective solutions to protect pupils from toxic fumes."

Greenpeace clean air campaigner Areeba Hamid said: "Air pollution is a blight on London, so it is hugely encouraging to see the Mayor prioritising this issue.

"Along with these measures, the Ultra-Low Emissions Zone will help to clean up the city's air by phasing out the most polluting vehicles, letting our children breathe easy.

"But we also need to see action nationally to tackle the impact of diesel fumes on public health.

"We are hoping that the Mayor will continue raising these issues with government, where, sadly, we are mainly seeing inaction."