"Housing is the key issue," declared the independent chair Charlotte Jones at the end of the Young Vic's election hustings. 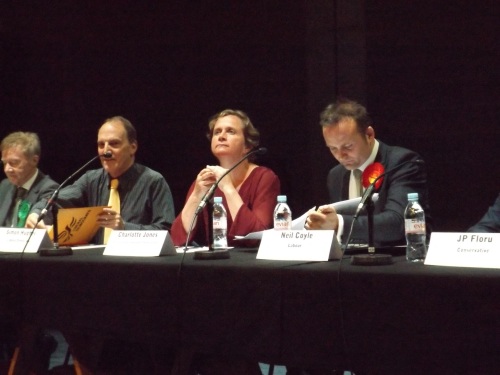 The YV's Maria theatre was fully booked on Friday night for the 90 minute confrontation between Bermondsey & Old Southwark parliamenary candidates.

"My battle is both against Boris [Johnson] as Mayor and the local Labour council because we are not delivering the affordable housing we need.

"I think the government has done better than any other recent government but not nearly nearly enough."

Labour's Neil Coyle, who according one opinion poll could be within one percent of taking the seat, said that homelessness and rough sleeping had grown in the Elephant & Castle during the past five years.

"Only the Labour Party is committed to tackling those problems that we see in this community."

In a clash with his main opponent, Neil Coyle said that Southwark Council had built more affordable homes in the last four years than any other London borough.

But Simon Hughes claimed that only 44 council homes had been built since 2010 and many others had been demolished.

Simon Hughes, replying to questioning from audience members unhappy with coalition policies, said that he had never been happy about how the right to buy policy worked. The decision should not be imposed but taken at council level as in Wales.

Green candidate William Lavin also opposed right to buy and warned that a third of homes bought so far had been sold on for profit.

Conservative JP Floru admitted that revenue from council house sales had not been invested in new housing but supported his party's new policy of extending right to buy to housing association tenants.

In response to a claim that north Southwark was becoming a ghost town of vacant luxury flats with overseas owners, Mr Floru denied they were empty but regretted that the riverside was becoming 'Monaco on Thames'.

A male voter from Bermondsey claimed that his adult daughter and partner were living at his home due to being unable to afford a flat in their own area.

UKIP candidate Andy Beadle said that you cannot buy a £500,000 flat on a £20,000 income. He also condemned the right to buy scheme as unworkable and called for building on brownfield sites.

Mr Abrams, who works for a housing association, said that he would scrap the right to buy.

In condemning cuts he warned: "Labour cuts your legs off slightly slower than Tories."

Independent candidate Lucy Hall, standing on a direct democracy programme and speaking from the audience, proposed that voters should be able to vote on every bill during the course of a parliament by using an app.

Republican Socialist Steve Freeman warned that we should enjoy life as it was about to get worse.

"We are having a pre-election boom." he claimed. "You need to eat, drink and be merry because after May 8 they are coming for your wallets."

Donald Cole from the All People's Party did not appear.

We hope to provide live audio coverage of both meetings at http://mixlr.com/se1