Southwark councillors have approved plans for the redevelopment of Wedge House in Blackfriars Road. 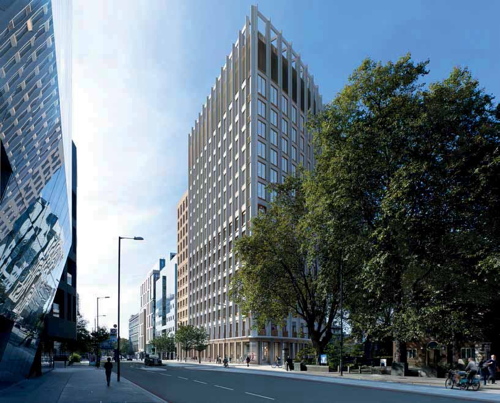 Southwark's planning committee unanimously backed plans for a new sixteen-storey hotel and office block at their meeting on Tuesday night.

The development, by Derwent London, will replace the existing six-storey former social security office at Wedge House. The Prince Albert pub in Colombo Street, which closed earlier this year, will also be demolished.

Until recently Wedge House was occupied by the Kids Company charity.

The new building – designed by Lifschutz Davidson Sandilands – will include a 192-room branch of the Hoxton Hotel chain with five floors of office space above.

The building will feature a rooftop 'sky bar' and restaurant.

The restaurants and bars at street level and on the rooftop will be operated by Soho House – best known for its private members' clubs – but will be open to the public at large.

Planning officer Yvonne Lewis told councillors that the new building – at 16 storeys – would serve as a transition between the very tall buildings at the northern end of Blackfriars Road and the mid-rise buildings further south.

The committee was addressed by Tim Wood, chair of Bankside Open Spaces Trust, who raised concerns about the impact of the tall building on the adjacent Christ Church Garden and called on councillors to ensure that some of the community infrastructure levy (CIL) payments associated with the development are directed to the garden.

Separately, Derwent London offered a payment of £50,000 towards improvements to the garden and £10,000 to restore the crumbling Georgian pillars at the entrance to the garden.