Waterloo residents and King's College London have collaborated on an experiment to test pollution levels on streets in Waterloo. 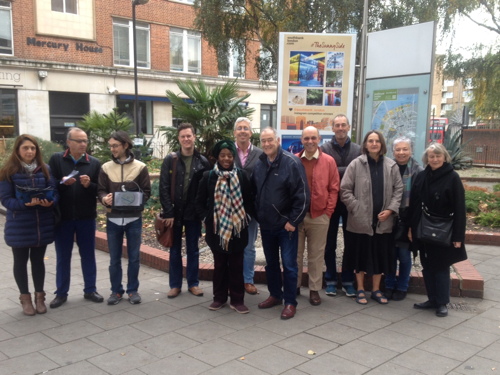 They found that back streets just 20 metres from Waterloo Road had 50 per cent lower pollution levels, adding weight to the suggestion that pedestrians should seek out walking routes away from heavily trafficked streets.

South Bank & Waterloo Neighbours – the group compiling a neighbourhood plan for the area – has been working with King's College to gather evidence which will put pressure on Lambeth Council to invest in infrastructure to encourage walking through less polluted back streets such as Cornwall Road and Hatfields.

The South Bank and Waterloo Neighbourhood Plan will call for back streets to be designed for this purpose, with more trees, places to rest and a building designed to absorb ambient noise.

SoWN is also calling for permanent air quality monitoring equipment to be installed in Waterloo.

"After the VW emissions scandal, the interest of Londoners in how air pollution affects them reached new levels of intensity," said Andrew Grieve, of the King's College Air Quality Monitoring Unit.

"Citizen-run experiments like this demonstrate not only that people want to find out for themselves what's going on, but also that inner London resident communities can change their behaviour to reduce their exposure."

Bishop's ward councillor Kevin Craig said: "I am very proud of these local residents who took the initiative to test their own air, and I will do all I can to ensure that Lambeth takes notice of the clear messages that are coming out of Waterloo that local residents will not rest until they see air pollution brought under safe limits."