Ten years after plans to rebuild Dockhead Fire Station were first announced, firefighters have moved in to their new premises. 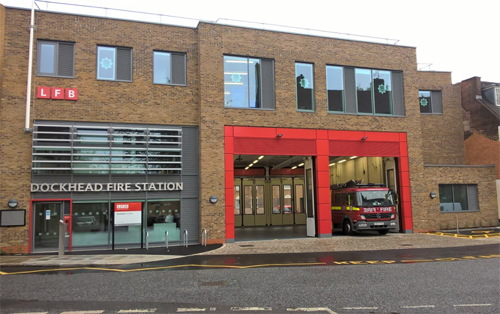 Dockhead Fire Station was made famous throughout the 1980s and 1990s as the fictitious Blackwall Fire Station in the ITV series 'London's Burning'.

Located on Wolseley Street, the new station includes two larger appliance bays which are better able to accommodate the brigade's latest vehicles, a four storey drill tower for training, offices and meeting rooms, a gym, lecture and quiet study rooms and a kitchen and dining area for firefighters.

The rebuilt station also includes areas the public can visit to access important fire safety information, as well as a community room which will be available for bookings.

For the past year the fire engine and crews normally based at Dockhead have been operating from Deptford Fire Station.

David Lindridge, the LFB's borough commander for Southwark, said: "This brand new fire station is good news for our firefighters and good news for the local community.

"The previous station had served the community well for many years but was coming to the end of its working life and could no longer support the demands of a modern fire and rescue service.

"This fantastic new station provides us with facilities fit for the 21st century which will serve the people in this part of Southwark and London as a whole for many years to come."

The new station is part of a private finance initiative (PFI) scheme first announced in 2006.