Westminster Bridge: silence and flowers one week after attack

Hundreds of people - including representatives of faith groups, police officers and other emergency services - gathered on Westminster Bridge exactly one week after the terrorist attack which left five people dead. 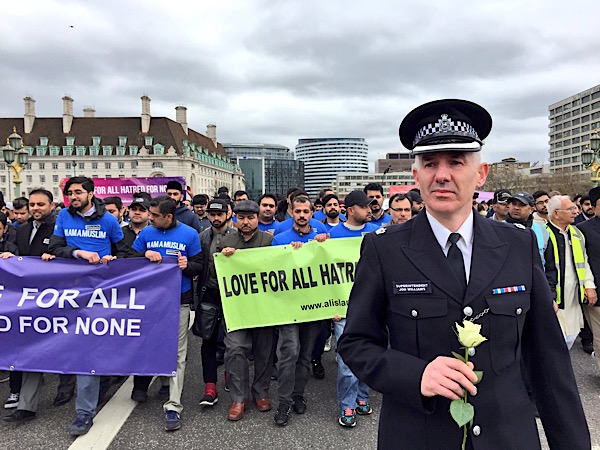 The Bishop of Southwark, Rt Revd Christopher Chessun, was among those who laid flowers at the scene of the attack one week on.

Hundreds of police officers as well as staff from St Thomas' Hospital and members of the Ahmadiyya Muslim Association took part in the commemoration, which included a minute's silence and the laying of flowers.

Five people – including the perpetrator Khalid Masood – died as as result of the terrorist attack on Wednesday 22 March.

PC Keith Palmer was killed when Masood attacked him with a knife outside the Palace of Westminster.

Three pedestrians on Westminster Bridge were killed when Masood drove his vehicle over the pavement at high speed: Aysha Frade (who worked at nearby DLD College London), Lambeth resident Leslie Rhodes and American tourist Kurt Cochran.

The Metropolitan Police has announced that the funeral of PC Keith Palmer will be held at Southwark Cathedral at 2pm on Monday 10 April.

The Dean of Southwark, the Very Revd Andrew Nunn, said: "Southwark Cathedral is honoured that the funeral service of PC Keith Palmer will take place here.

"PC Palmer served in south-east London, not only with the Metropolitan Police but also with the Territorial Army.

"We shall be keeping Keith, his wife and family in our prayers along with all those killed, injured, traumatised or affected in or by the attack as we prepare for the service."