The Sunbathers: Festival of Britain sculpture to return to South Bank

A sculpture displayed at Waterloo Tube Station during the Festival of Britain in 1951 has been found at a London hotel after Historic England's 2016 drive to track down lost pieces of public art. 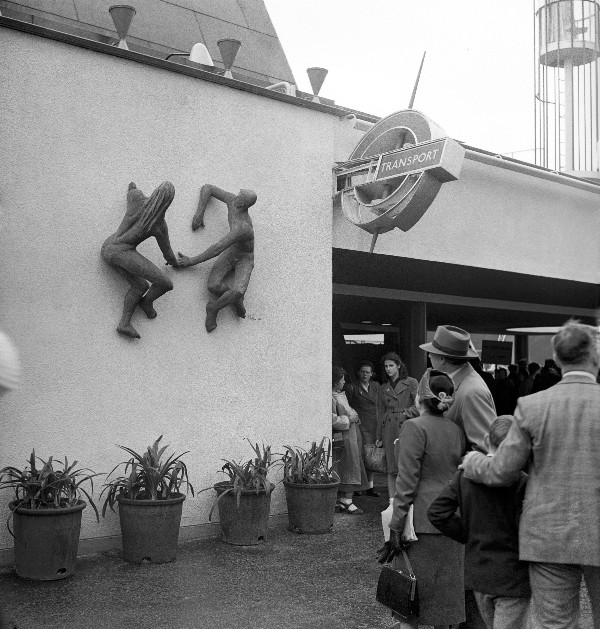 The Sunbathers sculpture on display in York Road in 1951 (photo: PA Images) 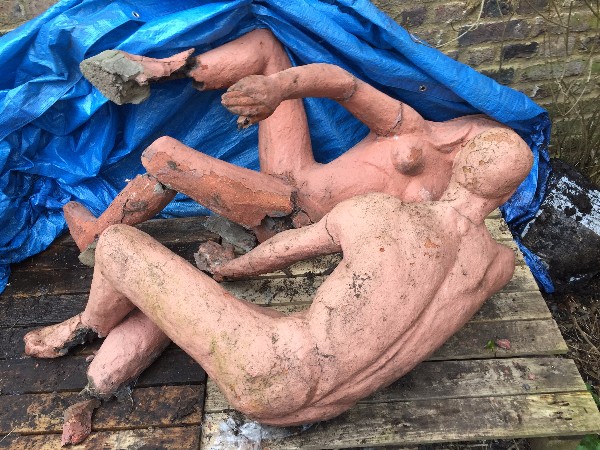 The artwork in its current condition

The heritage body launched a crowdfunding campaign to help restore the piece to its former glory and has already raised more than its original £15,000 target.

The Sunbathers, by Hungarian artist Peter Laszlo Peri, was presumed lost forever after the Festival on the South Bank closed in September 1951 and many of the temporary exhibition's sculptures were destroyed.

But a couple visiting Historic England's exhibition Out There: Our Post-War Public Art at Somerset House last year recognised the sculpture from photos of missing pieces of art as one that they had seen in the garden of The Clarendon hotel in Blackheath.

The pair of figures was originally mounted on the wall of the York Road entrance to Waterloo Underground Station.

They are made from a special kind of concrete known as Peri-crete, invented by the artist as a cheaper alternative to casting in bronze.

The Sunbathers even made an impression on poet Dylan Thomas, who wrote of "the linked terra-cotta man and woman fly-defying gravity and elegantly hurrying up a W.C. wall" in his essay about his visit to the festival.

Historic England has raised £15,000 from the public to help restore The Sunbathers so that can go back on public display and take pride of place at the Royal Festival Hall for three months as part of the Southbank Centre's Summertime programme.

Celia Richardson from Historic England said: "The Sunbathers is a remarkable survival. It speaks of a time when the Festival gave hope, optimism and colour to a battered and bruised post-war nation. Today we are asking the public to help us recreate that spirit and contribute to the restoration of The Sunbathers, so it can delight visitors to the South Bank once again."

In the 1960s the owner of The Clarendon Hotel in Blackheath, Joseph O'Donnell, bought the sculpture at auction and laid the figures on a patio in the hotel gardens. Since then, countless hotel guests have enjoyed the piece, with generations of children scrambling over the figures at weddings and tea parties.

Josephine O'Donnell, daughter of Joseph and one of the current owners of the Clarendon hotel, said: "I remember The Sunbathers as a child, climbing on them in our sunken garden at the front of our hotel; I used to call them Adam and Eve. I'm thrilled that they are being given a second lease of life."

Peter Peri, grandson of Peter Laszlo Peri, said: "The Sunbathers rediscovery now is a wonderful, even miraculous event and I'm delighted to support Historic England's campaign for its restoration. The sculpture has a radical vertical format; its representation of a sundial-like dynamic engagement between ordinary people at leisure and the cosmos is a great example of my grandfather's unique mixture of Constructivism and Realism."

Jean MacIntyre, granddaughter of Peter Laszlo Peri, said: "My grandfather would have been absolutely delighted by Historic England's campaign. For him, the most important thing was to have his art in public places so everyone could pass by and appreciate them. In 1966 he held an exhibition called 'It's the People who Matter' which summed up his philosophy, he would have been very moved to know that it's the people who will save this marvellous piece of public art for future generations to enjoy."

Having raised £15,000 for the restoration work, Historic England has set a further crowdfunding of £27,000 so that a permanent home can be found for the artwork after its display at this year's Southbank Centre summer festival.