Police warn Waterloo passengers not to give to beggars

The Metropolitan Police has installed a giant digital sign in Waterloo Road urging passengers arriving at the station not to give money to beggars. 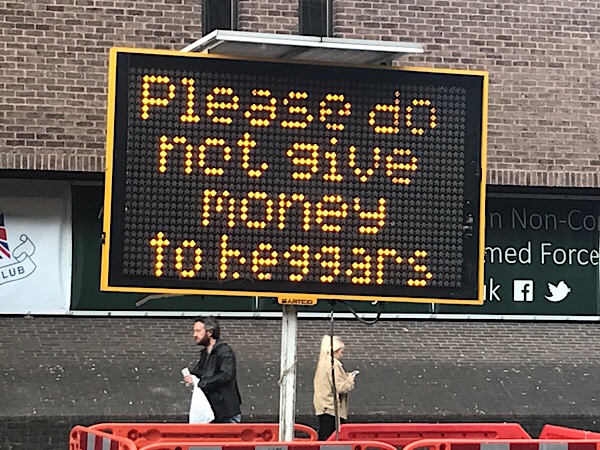 However, Paul Noblet of homelessness charity Centrepoint told BBC Radio London that the police's approach failed to distinguish between aggressive beggars and the most vulnerable.

"One of the biggest things that faces the young people we support is that constant stigma that is attached to rough sleepers, and I think that this is something that this sign – because it is just so blunt – runs the risk of doing, which is tarring everyone with the same brush," said Mr Noblet.

Mike Tuppen, chair of the Bishop's ward safer neighbourhood panel, told BBC Radio London that begging and antisocial behaviour had been one of the priorities set by local people for police officers in Waterloo for the last two years.

Mr Tuppen warned that giving money to beggars encourages rough sleepers to become entrenched on the streets rather than using the hostels and other services available.

"Our team is very compassionate to homeless people," he said. "They've done more work than probably any team in London connecting those people who want it with the services that are available."

Mr Tuppen also said that the increased police presence in Westminster since the recent terrorist attack meant that more beggars are now operating on the South Bank.