A new mother has thanked staff at Waterloo Station who helped her when she gave birth to a baby boy at the busy railway terminus last month. 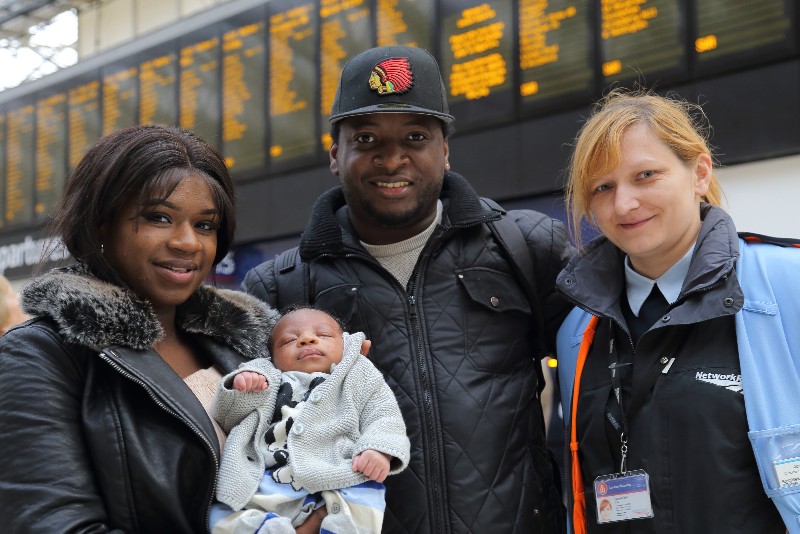 Evelyn Brandao, who was pregnant and travelling with her family, was on a train from Woking to Waterloo on 16 October.

Five minutes before the train reached Waterloo Station, at 3.45pm, she told the train guard that she was about to have her baby.

The guard immediately called the station control team who sent staff to meet her at platform 13 and phoned for an ambulance.

However, the baby did not wait and at 4.10pm, as Evelyn was taken into the first aid room, baby Reign was born, weighing 6 lbs 8 oz.

After being checked over by paramedics, all of the family were then taken to St Thomas' Hospital.

Evelyn Brandao said: "It was a bit of rush getting off the train and finding somewhere private so I was absolutely relieved when I got to the first aid room.

"The staff looked after me really well and made it as easy as possible. We were hoping that Reign would wait, but there was no chance. The raspberry leaf tea that I had must have really worked!"

Network Rail's Justyna Syla, shift station manager, was the first to answer the call from control. She said: "I tried to calm Evelyn down as much as I could, but I'm not sure that the paramedics fully believed her when she said that the baby was coming right now!

"Everything happened so quickly and everyone responded well to the situation – it was a first for me and something that will live long in the memory."

Lauren Smith, a midwife from the Home from Home birth centre at St Thomas' Hospital, looked after Evelyn and Reign when they arrived. She said: "We get a lot of patients travelling to see us from Waterloo but they are not normally this young!

"When Evelyn and her baby arrived at St Thomas' it was our job to make sure that they were both safe and healthy, so it is wonderful to see how well they are doing now."

Network Rail believes that Reign is the first baby to be born at Waterloo Station.

The first recorded birth on the London Underground was at Elephant & Castle Station in 1924.