Peter John steps down after 10 years as Southwark Council leader

Peter John has announced that he is stepping down as leader of Southwark Council after nearly a decade at the helm of the borough. 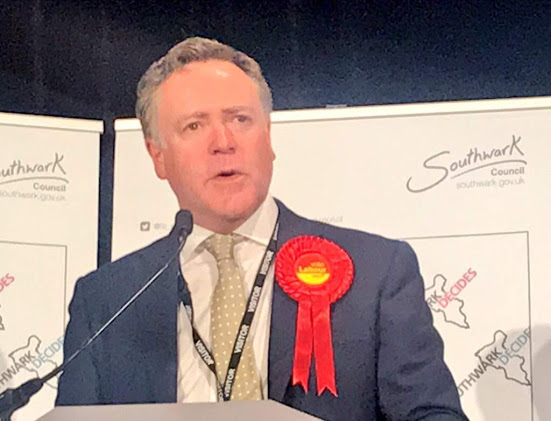 "I have concluded in recent times that it is time to move on", Cllr John told councillors at Wednesday night's council assembly.

A new leader will be elected by the Labour group on 25 March.

Cllr John said that his successor "will take this administration to even greater heights".

Councillors from both parties – Labour and Lib Dem – stood to give Cllr John a standing ovation after his announcement.

Opposition leader Anood Al-Samerai told Cllr John: "We've not always agreed, but we agree on the value of public service and you've clearly been a very committed public servant to this borough."

In his resignation letter, Cllr John said: "Our decade of delivery would not have been possible without the support of fellow councillors, an amazing team of officers, and friends and partners right across Southwark and London.

"I have always believed that we work best as a team, and that together we share responsibility for our successes and any failure. Thank you for your part in helping to make Southwark such a borough of hope and opportunity."

Before the 2018 local elections, Cllr John told SE1 that he was "still fizzing with ideas".

He told us then: "I don't think leaders should be around forever – you do have a shelf-life – but my best before date has not yet been reached, I suppose I would say."

"Together, and with the support of our fantastic officers, councillors and partners, we have taken Southwark on an exciting journey over the last decade, truly transforming our borough into a great place to live, work or visit.

"On behalf of the whole council I wish Peter every success in whatever he does next. We will miss him but I know that the council will continue on our shared mission to deliver the very best and a fairer future for all Southwark residents."