Actor and director Charles Dance has launched a London branch of the ROKPA charity. 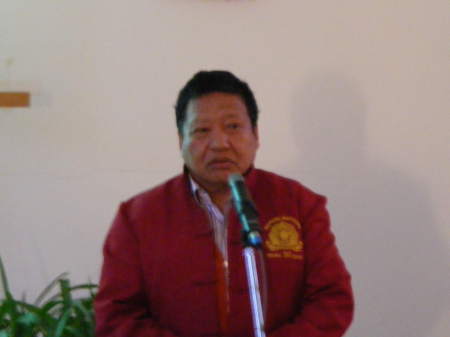 Supporters of ROKPA gathered at the Kagyu Samye Dzong Tibetan Buddhist Centre in Carlisle Lane for the formation of the charity's London support group. ROKPA means 'help' in Tibetan.

Among those present at the packed gathering was the founder Akong Rinpoche making a rare appearance in Britain. During his short speech he stressed that the charity which provides food and medical care to the poor in 18 countries remains non religious and non political.

Earlier BBC producer Jill Dawson, who directed the BBC Lifeline film about the charity, spoke about her continuing support for ROKPA which has made her one of its ambassadors.

ROKPA was established as charity for humantarian aid more than 28 years ago in Zurich. It seeks to provide sustainable aid in remote areas in Asia and Africa. Fundraising is undertaken by volunteers enabling the charity to operate without expensive premises.

It is hoped that a London office will increase the profile of the charity. British supporters include former Liberal leader Lord Steel. Speaking of his own role, Charles Dance says: "I hope this is only the beginning of a long and joyous friendship."

• Kagyu Samye Dzong has been established for 10 years in the former Holy Trinity School which is due to be demolished to make way for the Founder's Place development by Guy's and St Thomas' Charity.