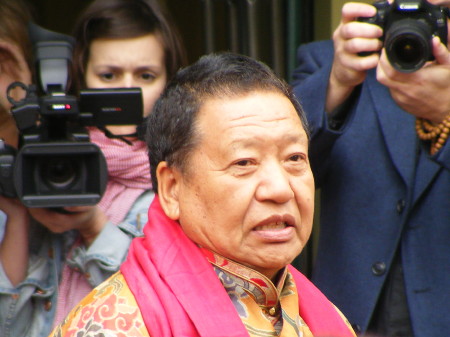 Akong Rinpoche outside the new centre 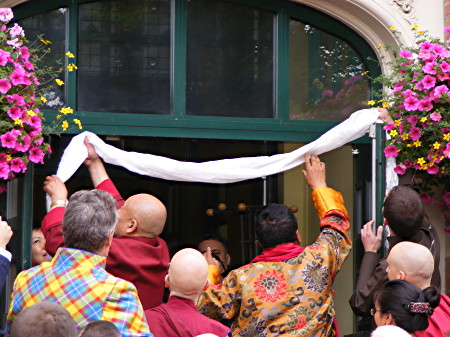 Kata, a ceremonial scarf, is draped over the doorway to bring good luck 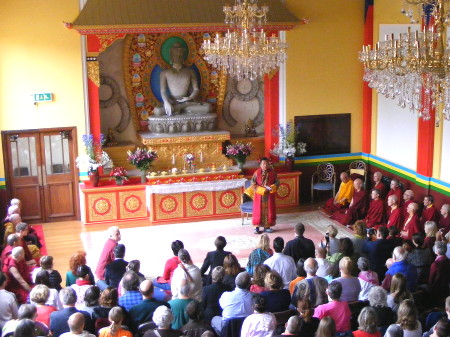 The centre, which now occupies the former Bermondsey Library built in 1892, is a branch of the Kagyu Samye Ling Monastery in Scotland.

The London base, known as Kagyu Samye Dzong, was formerly located in the former Holy Trinity School buildings opposite St Thomas' Hospital. The move was made necessary by the planned Founder's Place development which was cancelled just last week.

Most recently the organisation has been based at the old Manor Place Baths in Walworth.

Akong Rinpoche, a tulku of Tibetan Buddhism and a founder of the Samye Ling Monastery in Scotland, cut a ribbon at the entrance and laid a Kata, a ceremonial scarf, over the doorway watched by a large crowd blocking Spa Road on Sunday morning.

"We moved from house to house," said Akong Rinpoche speaking later to guests in the shrine room dominated by a large Buddha statue.

"We were homeless. But we are now established for 999 years," he added to cheers. "I don't know how many generations there will be.

"Today is an auspicious day and is called 'Elements of the Fire and Wind'. When fire and wind meet together you can do all the powerful things."

He praised the progress with the conversion of the building especially during the last week. "When I came here two days ago I was very frightened that it was not finished," he observed.

"This centre has much to offer," he said when announcing its intention to work with the local community to benefit the poor, homeless and sick. Every Wednesday there will be a community clinic offering complementary healthcare from qualified practitioners.

Celebrations continued with the cutting of a six foot long freshly made cake decorated with strawberries and blackberries.