An evergreen Mexican orange blossom bush was planted in Spa Gardens, Bermondsey, on Saturday as part of an interfaith environmental event. 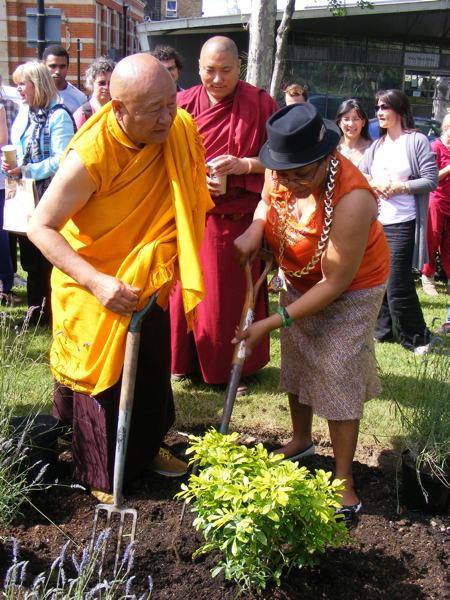 The Sundance Choisya, a plant with leaves which can turn golden in the sun, was placed in the ground on Saturday afternoon by Lama Yeshe Losal Rinpoche, Abbot of Samye Ling Tibetan Buddhist monastery in Scotland, and Mayor of Southwark Cllr Althea Smith.

The shrub has been planted opposite the Tibetan Buhddist centre in Spa Road.

Earlier guests had gathered indoors to hear religious leaders reflect on faith-based approaches to caring for the environment.

The event, hosted by Kagyu Samye Dzong London Tibetan Buddhist Meditation Centre for World Peace & Health, was part of an interfaith initiative to mark the Queen's Diamond Jubilee called 'A Year of Service'.

The project is intended to highlight and celebrate the voluntary service carried out by people of faith in their local communities.

Each of the participating groups has chosen a theme – for Buddhists this is 'caring for the environment' – so Southwark's Kagyu Samye Dzong invited leaders of other local faith groups to give short talks about the approach of their faith to the preservation of nature and the earth's resources.

"The Christian Bible begins and ends in a garden, Eden, and that garden of paradise with a river flowing through it that gives life," said the Dean of Southwark, the Very Revd Andrew Nunn.

He described St Francis of Assisi, patron of ecology, as "the saint for our age".

"What we as Christians need to address, with you, our sisters and brothers of faith, are the spiritual issues which hold so many of us back – the greed, the selfishness, the apathy – that mean that we are not as committed as we always should be."

Also present was painter Lama Rinzan from Nepal who is in Bermondsey to provide decoration for the community's shrine room.