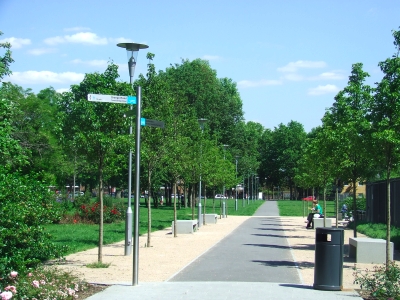 Spa Gardens in Grange Road – relandscaped two years ago at a cost of Ł2 million – is one of 151 green spaces in London and nearly 750 across the country to receive a Green Flag Award recognising it as one of the best parks and green spaces.

"This recognition came as a result of tireless work from parks staff, our contractors, and most of all, our friends of parks groups and voluntary sector partners," says Cllr Jeff Hook, executive member for the environment.

"Many Southwark households don't have a private garden so it's particularly important that people have somewhere to go to escape the stresses and strains of everyday life.

"Having accessible green spaces where people can enjoy each other's company is important for families and for our community – so I encourage people to make the most of our world-class green spaces this summer."

Potters Fields Park next to Tower Bridge – which reopened a year ago after a Ł2.7 million revamp – receives a Green Pennant because it is managed by an independent trust rather than the council.

"I feel it is a reflection of how well the park has been received by the local community and businesses as well as visitors. We hope to build on the success of our first year by developing closer links with the community around us.

"I would like to thank all our partners and friends who have helped make this award possible. Particularly Southwark Council's parks department and the gardening team that have done a great job in looking after such a popular park."

Winners are judged against stringent criteria and should be welcoming and well maintained with the support and involvement of the local community.

"I would like to congratulate all those whose hard work has resulted in this year's Green Flag winners," says communities minister Baroness Andrews.

"In our busy modern lives, parks and green spaces are invaluable as areas where young and old can come together to relax, exercise and play."

The winners collect their flags next week at a ceremony in Liverpool.

The Green Flag Award scheme, launched in 1996, is managed by the Civic Trust.