Southwark-based In Toto Theatre received £15,000 from the Lord Mayor of the City of London to enable local people to get involved in the Lord Mayor's Show on Saturday. 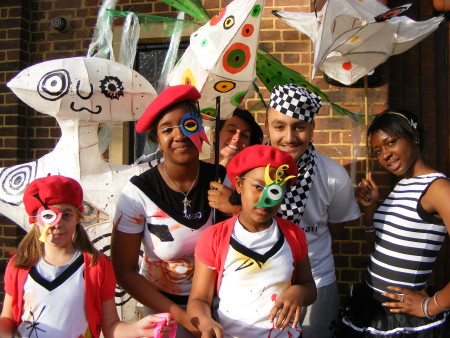 Participants in a half-term workshop at the John Marshall Hall, Christ Church Southwark

More than 75 people including recent arts graduates, children and young people spent several weeks learning new skills and developing their creative and artistic flair to entertain around 300,000 spectators when the parade hits the streets of London on Saturday 8 November.

In Toto combines puppetry, live music, story-telling and dance to create a theatre experience for children, families and young people in the Lambeth and Southwark areas.

"We're very excited at taking part in our first Lord Mayor's Show," says Sarah Carter. "It's a great opportunity for our young people to learn new skills in the design and creation of the masks, costumes and float."

Based at the Colombo Centre near Blackfriars Road, the group hosted workshops in street dance, circus skills, musical percussion, mask and puppet-making and body/face painting,.

Reflecting the theme of "Art in the Air" their show entry featured brightly-coloured costumes, expressionistic in style, inspired by the artist Joan Miro.

Participants will carry all kinds of weird and wonderful creature creations and puppet figures, in particular a colourful array of bird puppets and masks.

They were accompanied by a street jazz band with saxophones and trumpets playing alongside bird whistles and theatrical sound effects.