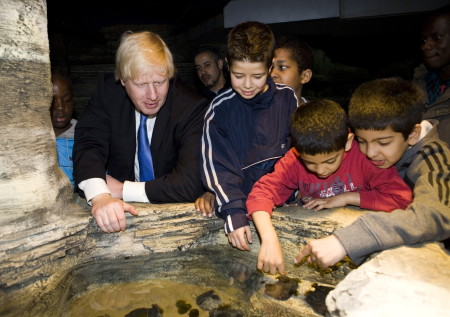 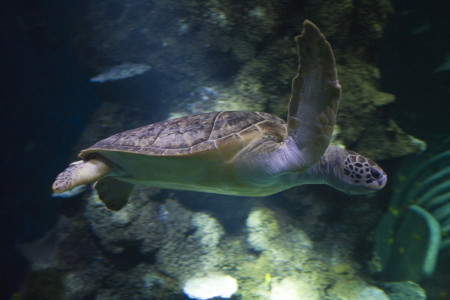 Boris the green turtle has been named in the Mayor's honour

Although he now runs London from City Hall near Tower Bridge, Mr Johnson is no stranger to County Hall where he launched his bid to win the Conservative mayoral nomination and had his campaign HQ during the run-up to last year's London election.

The London Aquarium first opened in 1997 in the bowels of the former home of the Greater London Council on the South Bank. Last year the attraction was purchased by Merlin Entertainments (owners of the London Eye and London Dungeon) who have just unveiled the results of their multi-million-pound re-development.

As well as taking in some of the highlights of the attraction which is now part of the Sea Life chain, the Mayor was presented with adoption papers for one of the endangered green turtles who has been named Boris in his honour, and joined in ray feeding time with children from Kennington's Lilian Baylis School and Larkhall Park School.

"We are delighted the Mayor could visit us today and put the official seal on the opening of what is undoubtedly a world-class aquatic experience," says general manager Toby Forer.

"He took in some of the key highlights including the world's biggest collection of Cownose rays, joined in the ray feeding with a group of school children and got to "meet" his newly adopted family member – our beautiful green turtle, Boris!"

As well as green turtles, the new Sea Life London Aquarium is home to thousands of marine creatures spread over three floors and 14 themed zones. The attraction will also be involved in breeding and research programmes.

Other key features include the story of the River Thames, an Atlantic coastline display, an entire "temple" dedicated to seahorses and a nerve testing finale that invites visotrs to stroll over a glass walkway constructed over the enormous Pacific display – home to five different species of sharks – as they swim just inches below.

The revamp has been accompanied by a 15 per cent hike in ticket prices – last year a standard adult admission ticket cost Ł13.25. This year's price is Ł15.25.