People and organisations who have made a significant contribution to local life were recognised at the Southwark Civic Awards ceremony held in Camberwell on Saturday. 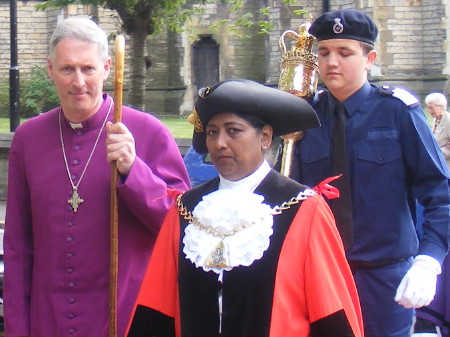 The Mayor of Southwark processing from St Giles Church to the Town Hall after the ceremony, accompanied by Bishop of Woolwich Christopher Chessun

The Mayor of Southwark, Cllr Eliza Mann, presided over the ceremony held at St Giles' Church along with deputy mayor Denise Capstick and past mayors including Bob Skelly, Charlie Cherrill and Vicky Naish.

Jean Attridge, chair of the Longfield Estate Tenants' and Residents' Association, received the Honorary Liberty of the old Metropolitan Borough of Bermondsey.

The citation for her award said: "Since moving to the estate she has worked countless voluntary hours to find funding opportunities to enable her to put in place affordable activities. She does what she does because she believes that a community works best when it works together."

The same honour was awarded to Kathy Crawley and Linda Virtue for their work on the Guinness Square estate in Page's Walk. They established a tenants' association 30 years ago and organise a variety of community events and activities.

Leslie Lee, until recently chair of the Applegarth Tenant Management Organisation on the Nelson Square Gardens estate, received the Honorary Liberty of the old Metropolitan Borough of Southwark in recognition of 20 years' service to the community.

The citation said: "He is regarded as someone who will help anyone and is very well-respected for his vast knowledge of local community issues."

Sue Hill, who runs Sue Hill Recruitment on Borough High Street, received a letter of commendation for her work on behalf of the Peckham Society.

Local amateur dramatic group The Quay Players, who hold their rehearsals at St Anne's Church Hall in Thorburn Square, also received a letter of commendation. The group, established for 12 years, has members aged from 12 to 65 and puts on two shows every year.

The awards are organised by the Southwark Civic Association.

On Sunday 17 May Ada Lusby was presented with the Freedom of the old Metropolitan Borough of Southwark in recognition of her voluntary work for the Parish of St Alphege.
Ada has been a pillar of St Alphege for more than 50 years. Fr Ray Andrews presented the award after Sunday morning Mass.