The Mayors of Southwark and Lambeth were the guests of honour at a dinner held last week to celebrate the 50th anniversary of the archaeological society devoted to saving and promoting the heritage of the two boroughs. 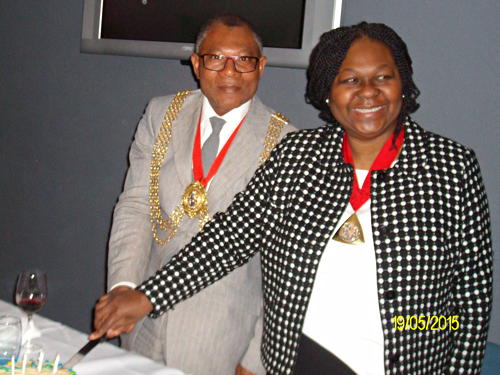 The Mayors of Lambeth and Southwark cut the celebration cake

The celebration dinner was held last week at the Novotel London Waterloo in Lambeth Road.

A cake was cut by the Mayor of Lambeth Donatus Anyanwu and the Mayor of Southwark Dora Dixon-Fyle MBE as part of the birthday celebrations.

Founded in 1965 as a rescue group, the society has been involved in many key local discoveries including the first delftware pottery kilns excavated in Europe, the remains of a priory which are beneath the present Southwark Cathedral and a Roman road leading to London Bridge.

In the early years of the society, archaeological digs were carried out by amateur volunteers.

As the work on the ground has moved into the hands of professionals, the society has become a forum for lectures on local historical topics, as well as publishing research in its SLAS News journal.

Between October and May each year, the society hosts monthly meetings in Waterloo.