Watch manager Ian Cooper from Dockhead Fire Station has been has been presented with a long service award after 30 years in the London Fire Brigade. 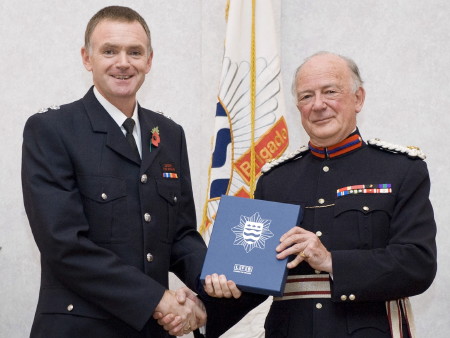 Ian, who was born and brought up in Bermondsey, joined the London Fire Brigade in 1979 and started his career at Deptford Fire Station.

He said: "The first job I ever attended was some rubbish alight – it was a bit disappointing!"

Things soon got busier for Ian and he recalls attending a massive blaze in a department store: "The fire was huge – it burning for about four days. As a relatively new firefighter it was quite exciting."

Ian then worked at Chelsea Fire Station and attended a huge range of incidents, including several fires and a train crash in Battersea. He was then promoted to become watch manager of the white watch at Dockhead Fire Station in Wolseley Street, where he works now.

In 1992 Ian was sent to help tackle the Windsor Castle fire. "It took over 200 firefighters to get the blaze under control," says Ian.

"We were aware the castle housed a huge collection of art so firefighters worked round the clock to try and stop the fire from spreading. At one point I saw the Queen come down to try and save some of the paintings."

Ian's award was presented by the deputy Lord-Lieutenant of Greater London, Sir Michael Craig-Cooper, at a ceremony held at the brigade's Southwark Bridge Road training centre.

On his 30 years in the fire service, Ian said: "I've had a great time – it's been fantastic. You meet so many different people and you never know what's going to happen next but you just learn to deal with whatever comes your way. I'd thoroughly recommend joining the brigade as a career."

Earlier this year councillors gave the go-ahead for plans to demolish and rebuild the 1920s fire station at Dockhead as part of a London-wide private finance initiative (PFI) project.