Work has begun on a new Rainforests of the World area at the Sea Life London Aquarium on the South Bank. 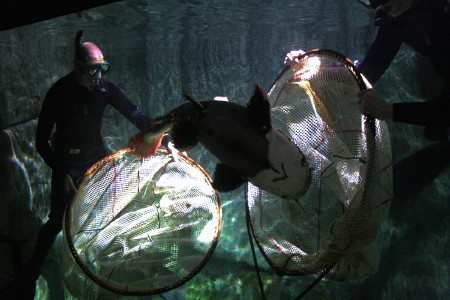 The catfish display is emptied at Sea Life London Aquarium

The new area will feature crocodiles, piranhas and a family of poison arrow frogs.

The attraction, which relaunched last year as part of the Sea Life group, claims that it has seen record numbers of visitors.

The building work – which continues until March – will require the transfer of 750 creatures including terrapins, catfish and giant gourami by a team of marine biologists.

The creatures will be moved to temporary accommodation within County Hall before being settled back into their new home, along with some exciting new arrivals, in early March.

Containing 100,000 litres of water – the equivalent of 5,000 goldfish bowls – the draining of the displays and fish transfer will be a significant operation.

Rainforests of the World will totally replace the existing rainforest area and promises to take guests on an exciting themed journey through the vulnerable eco-systems of Malaysia, West Africa and South America.