A model of the integrated wind turbines at the top of the Strata SE1 tower has gone on display in the Summer Exhibition ot the Royal Academy of Arts in Piccadilly. 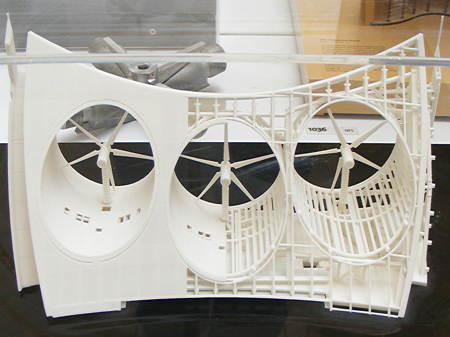 The 3D model is included in the architecture room where Allies and Morrison, Foster Lomas Architects and Trevor Dannatt RA of Dannatt, Johnson Architects have work featured.

Strata's wind turbines have this week been tested for the first time in preparation for the official opening of the Elephant & Castle landmark tower by Mayor of London Boris Johnson on 1 July.

Strata is designed by architects BFLS.

Studies for Shand Street, at the side of Southwark Council's Tooley Street building, are entered by Alford Hall Monaghan Morris.

SE1 artists as well as architects are well-represented this year. As expected Bermondsey-based Royal Academician Norman Ackroyd has prints of rural Ireland.

Frank Watson has entered a limited edition photographic print of the Thames estuary.

Displayed side by side are screenprints by Anthony Frost and Albert Irvin, both represented by Advanced Graphics London in Long Lane.

Craigie Aitchison RA, who died at his home off Kennington Road last year, is honoured with a memorial display in the Fine Rooms.

• There are two opportunities to see works rejected by the RA Summer Exhibition in SE1 this month: the annual Not the Royal Academy show at Llewellyn Alexander Fine Paintings in Waterloo opens on 14 June. This year the Menier Gallery is also hosting an exhibition of Summer Exhibition Rejects.