It is three years since two giant wind turbines were installed on the roof of BT's Colombo House - but complaints about noise mean that they have been out of action for at least a year. 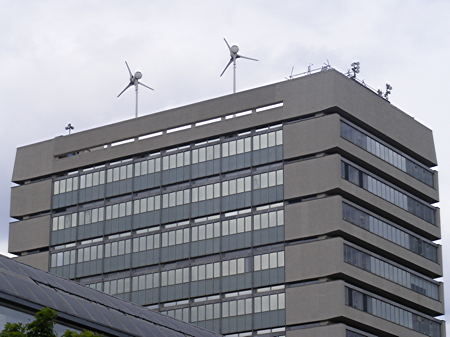 In April 2008 residents living near Blackfriars Road woke up to find two large wind turbines had been installed on the roof of The Telephone Exchange at Colombo House.

Neighbours soon complained to BT and Southwark Council that the turbines made a loud noise similar to a helicopter hovering overhead and so the equipment was deactivated.

Now BT has confirmed that the Colombo House turbines could be turned on again in the next few months if the noise problem can be fixed.

In a statement, BT told the London SE1 website: "We are working with the supplier and with the environmental health department at the local council to establish what conditions caused the complaints to arise and, if the causes can be mitigated, to allow the turbines to commence operation again, hopefully within the next few months."

Cathedrals ward councillors received complaints from Southwark residents as well as people in Roupell Street who live on the other side of the Lambeth border.

"While I welcome the indication that BT are looking at addressing the noise issues that led to the wind turbines being stopped I have to question their commitment to sustainable energy when it has taken over 12 months for them to seek a remedy," said Cllr David Noakes.

The turbines were installed as part of a nationwide carbon reduction scheme at BT premises. Richard Tarboton, BT energy and carbon director, said at the time: "The pilot scheme at Colombo House is an important step in establishing the long-term viability of renewable energy generation in urban settings."

The concrete facade of Colombo House has recently been given a coat of cream paint to improve its appearance.

The building is on the western side of Blackfriars Road and the wind turbines are mounted on nine-metre masts which are clearly visible from surrounding streets.

The turbines on the nearby Palestra building building were removed in 2007 after they were recalled by the manufacturers and despite promises have not been fully replaced.