173 luxury flats will be created in the refurbishment and extension of King's Reach Tower on the South Bank - but residents' groups have warned of the creation of a "rich ghetto" in north Southwark. 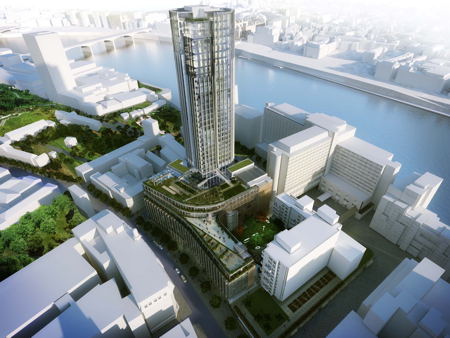 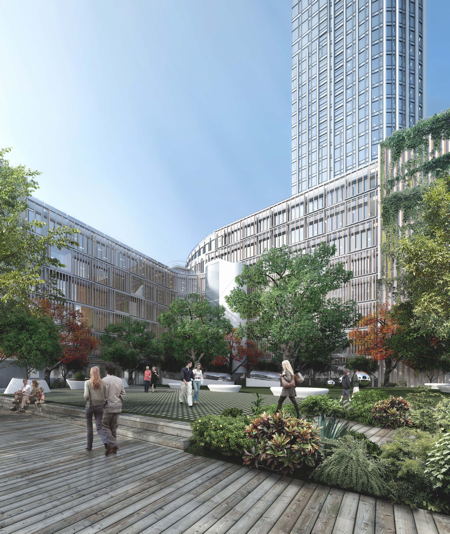 CIT's proposals for the transformation of the former IPC Media headquarters will include new shops along the streets around the perimiter of the site to replace the existing Milroy Walk arcade.

A supermarket is proposed for the corner of Stamford Street and Rennie Street and the Kalmak pharmacy will move to a new unit within the development.

Under the plans by Kohn Pedersen Fox (KPF) architects, six floors will be added to the existing 30-storey tower and from floor 11 upwards the tower will be converted to residential use.

Controversially, the planning application includes no on-site affordable housing. Southwark Council will instead receive a cash sum of Ł22.4 million to spend on new homes elsewhere in the borough.

The low-rise office blocks at the base of the tower will also be extended.

The planning application was approved by the borough's planning committee on Tuesday night with five votes in favour and two abstentions.

Objections to the application were voiced at the planning committee meeting by Michael Ball, director of the Waterloo Community Development Group, and Tim Wood representing Bankside Residents' Forum.

Michael Ball said that the KPF plans are "exemplary in many ways" but argued that the possibility of providing affordable housing on-site or in the immediate vicinity had not been properly explored.

"The floodgates are open for a dangerous precedent of 100 per cent private schemes," said Mr Wood – pointing to the committee's recent decisions on Neo Bankside, Newington Causeway and One Tower Bridge.

"For the last 40 years in this borough we've been trying to correct the issues that have come from the Heygate and the Aylesbury [estates] – both of which are now being knocked down. Private ghettos; affordable ghettos – whichever way it is."

He added: "We're looking for balanced communities; that's all."

Mr Wood added: "Do they accept that we are now going to go for 100 per cent [private] schemes north of Southwark Street? Or is it north of Union Street?"

CIT Group managing director George Kyriacou told the committee that the cash payment to the council of Ł22.4 million would fund the building of approximately 270 new affordable homes – far more than it would be economic to build at King's Reach.

The developer also voiced his hope that the King's Reach development would help to kick-start the dormant schemes on adjacent sites at 1 Blackfriars Road and 20 Blackfriars Road.

"We want to be the first on the dancefloor on Stamford Street," he told the committee.

Eric Bryan, chairman of the management company for River Court and Rennie Court, told the committee that, following recent alterations to the proposals, the company was now able to support the planning application which will improve the environment for the residents of the two blocks.

Cathedrals ward councillor Adele Morris addressed the committee to voice her support for the visual improvements that the refurbishment of the King's Reach complex will provide and to register her deep concern about the lack of affordable housing on the site.

Cllr Nick Stanton said that he wasn't convinced that the sequential test – that requires developers to explore all the options for on-site or nearby off-site affordable housing before a lump sum payment will be considered – had been met.

"We need to guard against a perception ... that the council is willing to allow applicants to overcome policy hurdles in the interest of securing a large ring-fenced cheque," he said.

"I'm not happy about the lack of on-site affordable housing," said Cllr Robin Crookshank Hilton. She added: "We could do better but I think we need to get on and do this and the community will be better served in the long run."

Cllr Darren Merrill said he was "a little bit uncomfortable" about the lack of affordable housing within the scheme but Cllr Neil Coyle pointed out that the developer's in lieu cash contribution could have a big impact on the borough's housing needs: "To have 270 homes when we've got a 15,000 waiting list shouldn't be ignored," he said.

Work on the refurbishment and extension of King's Reach Tower and the surrounding buildings could start early in 2012.

”Ł22 million is certainly not to be sniffed at and this is a favourable result for the council," says Cllr Fiona Colley, cabinet member for regeneration.

"It allows us the freedom to build genuinely affordable homes, to our specifications, for residents, where they are most needed, rather than being restricted to a specific site where the homes would either have to be reduced in number or compromised in terms of their affordability.”