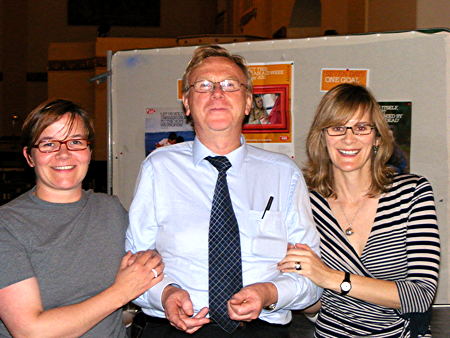 The WCDG trustees decided to reorganise staffing when David Fisher, who had been general manager for more than five years, left WCDG in June to take up a full-time volunteer position with the London Olympics.

David's farewell was at St John's Waterloo where the regular public meeting was held to discuss the church redevelopment. Abigail and Melanie were both there for the handover and ready for new challenges such as the huge Elizabeth House plans. Both live in the area and are already involved in the community.

Abigail and Melanie will work with WCDG's director, Michael Ball, and a new executive administrator currently being recruited.

Abigail Tripp lives off Waterloo Road where she is active in her housing co-op. One of her early neighbours was the artist Tracey Emin who lent her flat 'and other bed' to Abigail's friends to stay on Millennium night after seeing the fireworks.

Involvement in the community has led Abigail to be chair of SE1 United for several years and volunteer in Archbishop's Park. She has a preference for working in the area and recently ran local business start-up workshops.

It was at the Waterloo Women's Network, which she established, where she met Melanie and heard that she too was considering applying for the WCDG job.

"What I love about this area is a mixed population. I don't want to live in a ghetto," she says when referring to Southwark Council's new policy which allows developers to build new homes with no social housing in the north of the borough.

"Social housing should be on site. A mixed population makes communities strong."

Work opportunities brought Australian-born Melanie Tighe to Waterloo where she had accommodation at County Hall for six months. She soon decided that she did not want to leave the area and has now lived in Lambeth Road for seven years.

Meleanie has been employed by WCDG before when she worked with the Friends of Hatfields Green, the parents of Johanna Primary School and the Friends of Jubilee Gardens.

"I love the area," says Melanie. "I consider myself to be part of the community that is Waterloo. It is a village and it does take you half an hour to get to the local shops because you do see the same people every day.

"It's not as transient a population as you think it is. People think Waterloo is just a big train station and it's not."

She has recently been reading, and greatly enjoying, Gwen Southgate's Coin Street Chronicles which is giving Melanie a long reach back to the Waterloo of the 1940s.

She hopes that her appointment will encourages others to think about job sharing. "It does allow you to have the freedom to juggle," she says when mentioning her children who attended Johanna School and belong to Lambeth's Brownies, Guides and Cubs.

She hopes that she and Abigail can further energise WCDG and bring new demographics. Both want to see more people becoming involved in deciding Waterloo's future.