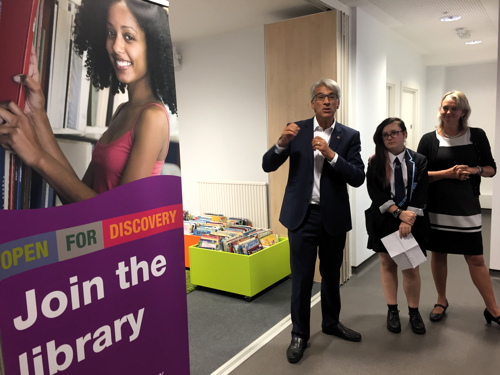 In July Waterloo Library left its Lower Marsh home for temporary premises at the Oasis Centre in Kennington Road. As well as the change of location, the new library has less space and a limited library staff presence, although overall opening hours have been extended.

This week Lambeth Council leader Lib Peck visited the library to perform the official opening in the presence of pupils from Oasis Academy Johanna and Oasis Academy South Bank.

Talking about Lambeth's controversial reshaping of its library service amid sharp cuts to funding, the council leader said: "What we wanted to do was to try and creatively redevelop some of those libraries so that we could make sure that they were still there, providing that bedrock of local neighbourhoods that we know and cherish..."

Cllr Peck continued: "It was great to develop a partnership with a very trusted organisation like Oasis who we have worked with very closely over many years.

"I think you will all agree that the result is actually an improvement on the building that was down the road.

"35 or 40 years that had been a temporary library. There was always going to be something better, but no-one had had the courage to do anything about it."

She added: "Coming here today I feel very inspired by how this space has been transformed."

Earlier this month Oasis founder Steve Chalke told guests at at Labour leadership hustings event: "We've taken on the local library ... because of the cutbacks that Lambeth had to make ...

"We're not particularly happy that we've taken on the library because these are savage cuts from central Government that denuded the local authority here.

"But, in the end – driven by a pragmatism that says children here need literacy, they need hope, they need imagination [and] creativity – it's either that you take on something that you think someone else should be providing, or you let it drop."

Bishop's ward Labour councillor Kevin Craig said: "We are over the moon at what has been achieved by Lambeth Council working in partnership with Oasis.

"It's a brilliant solution to ensure continued library provision in Waterloo and it's taken a huge amount of hard campaigning and persistence.

"Despite horrific budget cuts of 56 per cent we have protected and improved the library provision in Waterloo. It's a really uplifting day."

Campaigners against Lambeth's cuts to its library service are keeping up the pressure on the authority, with a protest held in Brixton last weekend and further events planned.

"Last year, Waterloo Library had 248 children happily engaged on the Summer Reading Challenge. This year the new 'neighbourhood library' opened at the Oasis academy as the holiday started," said a spokeswoman for the 'Defend the Ten' campaign.

"Staff did their best in the new Oasis mini-space, with fewer books, no room for activities and almost no staffing – but the result was that just six children completed the challenge this year."

On Wednesday night Steve Chalke is due to address a Waterloo Community Development Group meeting to talk about early plans for a new building on the Oasis Academy Johanna site, to incorporate a permanent public library for Waterloo.

Lambeth planning officers recently approved the change of use application for the old Waterloo Library building in Lower Marsh which is due to reopen next month as a pop-up shop and co-working space under the 'Granby Place' brand.

• The new Waterloo Library is open Monday-Friday 9am-6pm and Saturday 9.30am-5.30pm. Library staff are present for three or four hours a day, with self-service machines available at all times. The library can be reached via The Hub Coffee House at the Oasis Centre.