HMS Belfast's guns fired 40 blanks on Friday lunchtime to celebrate the 40th anniversary of the ship's opening to the public in the Pool of London. 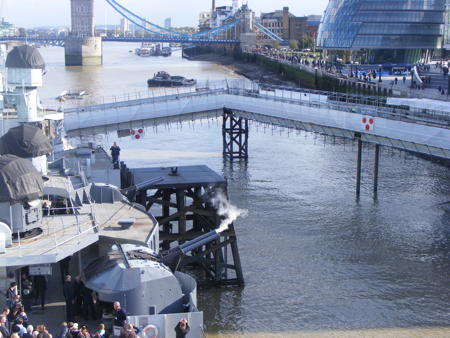 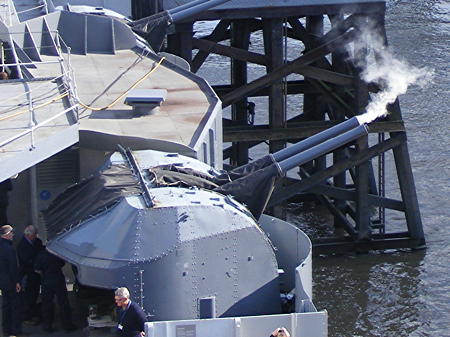 Nearly 8 million people have visited HMS Belfast since the warship began its new life as a museum and tourist attraction on Trafalgar Day 1971.

At 1.45pm Jason, a pupil at Tower Bridge Primary School, waved a flag to start the seven-minute gun salute.

The new building – designed by CPMG Architects – will include a rooftop cafe and is due to be open in summer 2012.

"We're thrilled about the new quayside pavilion which we believe will give HMS Belfast the support she needs to continue to be a high-profile cultural destination," says Phil Reed, director of HMS Belfast.

"As well as enhancing the area's aesthetic appeal, the new pavilion will help the Imperial War Museums to ensure that HMS Belfast is in the best possible position to generate the funds needed to preserve the historic ship and ensure its long-term financial sustainability,"

HMS Belfast – where admission is free for children – is an ideal place to visit during half term. Earlier this year the ship's operations room was opened to the public. ALBERT EVANS went to visit....

The room, which was the 'nerve centre' of the ship while in service, has been refurbished and is now fully accessible to the public. Visitors can now explore the pre-computer machinery and learn about the navigation and the ship's past missions using large interactive screens.

Dave Gibbon, who served in the operations room in the Far East, said that the new exhibit was very much true to the spirit of the room while it was in operation. The public can now try out the equipment which was previously behind screens.

"This exhibit brings out another part of the ship's history," said exhibitions manager Cressida Finch. She said she wants to provide a more 'immersive' experience.

"We are starting to look at it in a different light. Visitors want to do hands on things so the interactive exhibits and volunteers in full dress offer that. We do still have the traditional exhibits like the engine rooms as well."