Southwark Council has revealed that the selection process to find a tenant for the cultural space in the One Tower Bridge development on the Potters Fields coach park site is to be started from scratch by Berkeley Homes. 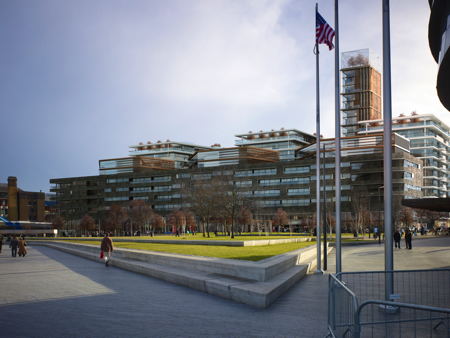 The council's admission that the process, which began in September 2008, had failed to find a suitable user for the cultural space in the prime riverside development, comes after one of the bidders shortlisted three years ago described the authority's handling of the matter as "a mystery inside an enigma".

The former coach park next to Tower Bridge has a chequered planning history. In July 2010 Southwark's cabinet agreed to enter a joint venture with Berkeley Homes to redevelop the land. Ownership of the plot is split three ways between the council, Berkeley Homes and the City of London Corporation.

Southwark councillors approved the latest scheme for the Potters Fields site in March and work is now under way. As well as 399 homes, the development includes 6,000 square metres for a museum, tourist attraction, theatre or concert hall but no end-user has yet been identified.

In December 2008 the council said that four possible cultural tenants had been shortlisted, including the British Empire and Commonwealth Museum, a sports museum and artistic collective Shunt. By April 2009 the sports museum and another anonymous bidder had been eliminated, leaving just two bids on the table.

The British Sport Experience says that it wants to use the cultural space to "celebrate Britain's rich sporting tapestry" with a new tourist attraction including a wide range of interactive exhibitions featuring mainstream and minority sports from around the world, coaching sessions, sports retail and restaurant zones and conference facilities capable of holding up to 1,000 delegates.

"The British Sport Experience has asked Southwark Council on numerous occasions to be included in a fair, open and transparent tender process but we have become continually frustrated by their refusal over the last several months to even consider our proposals," says founder Keith Williams.

"We believe most strongly that our proposals are of long term benefit to the borough and we should be included in an updated 2011 cultural tendering process.

"The people of Southwark and indeed of London deserve a wonderful new cultural attraction but we're confused and concerned by the differing stories and lack of transparency that Southwark have exhibited from the start. We urge Southwark to come clean and tell us and the people of the borough what is going on.

"The British Sport Experience has previously been told that there were two other cultural users taking part in the tender process, neither of which could possibly require or could fill the 6,000 square metres that is available."

Mr Williams added: "We have asked them how much rent they want and they have failed to provide this information.

"The British Sport Experience finds it incredible that, after nearly three years, it is still being told by Southwark Council that it is in 'ongoing negotiations' with the British Empire and Commonwealth Museum and Shunt.

"It's a mystery inside an enigma. No two stories are the same. The leader of the council Peter John says of the cultural user process that there 'has been extensive public consultation since 2008/9' and yet according to the deputy chief executive Eleanor Kelly 'there has not been any public consultation'. None of it makes any sense and meanwhile this high-profile cultural site remains empty."

Architect and former RIBA president Owen Luder, who is a director of the British Sport Experience, added: "We don't understand what's going on. If Southwark are seriously looking for a cultural user, how can they have wasted nearly three years sitting on two unrealistic options and be so confused?

"We provide the ideal cultural choice now and are concerned that, if the council decides a cultural user cannot be found, the use of this iconic site could become just another row of shops.

"Local authorities are strapped for cash and it is incumbent on them to obtain best value for their residents. The impact of the estimated one million visitors per year to The 'British Sport Experience at Potters Fields will be of benefit to local businesses and other cultural attractions. We will also support the council by sponsoring local sporting events."

Mr Luder continued: "Sport is a common language. It crosses all ethnic, social and economic divides. Our new sport-themed visitor attraction should become a flagship within Southwark to promote common values such as fair play and teamwork, values that are essential to sport and that will also help people work together in the community instead of rioting and creating mayhem."

A Southwark Council spokeswoman told the London SE1 website: "The council has followed its duties and carried out an entirely clear and open procurement process.

"This has not been successful in selecting an appropriate cultural user for the development at One Tower Bridge and the council will therefore be making a formal decision on closing this process.