Members of the Friends of Archbishop's Park joined council staff and contractors on Friday to celebrate the completion of a project to restore a wooden shelter in SE1's biggest park. 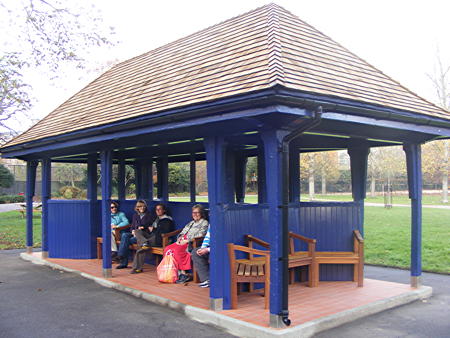 The shelter, which is the oldest structure in the park, was constructed by the London County Council before the Second World War.

The Friends group lobbied Lambeth Council to repair the shelter which was in a run-down state. The council has used section 106 cash paid by local property developers to give the shelter a makeover.

Architect Sherry Bates of Bates Zambelli found the original plans for the shelter in the Lambeth Archives at Minet Library and used these to aid the restoration project.

New hardwood seating has been installed as well as new floor tiles and a wooden roof to replace the old bitumen surface. The work was carried out by Barnes Woodfield who completed the project within budget and ahead of schedule.

Friday's event coincided with the raising of a new flag in Archbishop's Park to mark the third year that it has reached the prestigious Green Flag Award standard.

The Friends of Archbishop's Park is about to embark on a project for people with mental health difficulties and another collaboration with Walworth Garden Farm.

The group is also keen to encourage more local residents to help maintain and improve the park. Regular gardening sessions are held on Friday afternoons in Archbishop's Park and St Mary's Gardens near Lambeth Bridge. Tools are provided. Contact Helen Lees, chair of the Friends group, on [email protected] to find out more.