Choirbook for the Queen launched at Southwark Cathedral

Choirbook for the Queen, a collection of recently composed anthems, has been launched at Southwark Cathedral to mark next year's Diamond Jubilee. 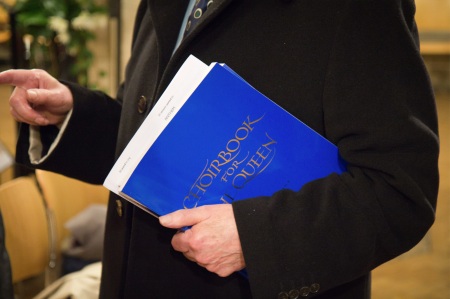 A copy of Choirbook for the Queen (Picture: Kieran Collins) 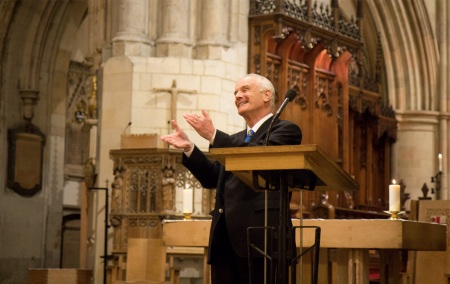 The Master of The Queen's Music speaking in Southwark Cathedral (Picture: Kieran Collins)

Many involved in the project were present at St Cecilia's Day choral evensong on Tuesday evening. Cecilia is the patron saint of music.

The book, in two volumes to avoid heavy weight when being held by singers, has been described as the equivalent of The Eton Choirbook compiled for Henry VII and still in use today.

The Prince of Wales is patron of the new book which the Queen had requested should be ecumenical. All the works have been composed since the Golden Jubilee a decade ago and contributors include John Tavener, John Rutter and Judith Weir.

Master of the Queen's Music Sir Peter Maxwell Davies was at the service to hear his anthem Advent Calendar sung for the first time in public. The text is a poem by Archbishop of Canterbury Rowan Williams.

"I love the way the birth of Christ is worked very carefully into natural events," commented Sir Peter before the service.

The composer flew in from New York where he had been attending rehearsals of his opera Kommilitonen which opened last week with Occupy Wall Street demonstrators outside.

"The publication of Choirbook for The Queen marks a highly significant moment for church music in this country," said Southwark Cathedral's music director Peter Wright who conducted the performance by the choir's gentlemen and boys.

"It is a great privilege that the launch is taking place at Southwark and an honour indeed for the cathedral choir to have the opportunity to sing the premiere of Peter Maxwell Davies's masterly anthem Advent Calendar – serendipitously appropriate for this time of the year."

Revd Lucy Winkett, former St Paul's canon and chair of the selection panel, turned to the musicians during her sermon to say: "You will never know even a tenth of the effect that your music making has on people. You will stir the hearts of people you will never meet and never know and this book could be the new way to do it."

There are 45 anthems selected for the book of which eleven are new commissions. The works will be heard next year during the live broadcasts of Choral Evensong on BBC Radio 3. The Advent Calendar anthem will have its broadcast premiere in December 2012 at the conclusion of Jubilee Year.

The New Testament lesson was read by Professor Peter Toyne, Choirbook Trust chairman and a member of the congregation, who together with his wife Angela has sponsored a set of choirbooks for the cathedral. Also present was Cherie Blair whose family is funding the copies to be used at Westminster Cathedral.

Choirbook for the Queen: A Collection of Contemporary Sacred Music in Celebration of the Diamond Jubilee (Canterbury Press Ł30) is on sale at Southwark Cathedral's bookshop.