The first bus designed specifically for London in more than 50 years made its first public appearance in the capital on Friday when it was displayed outside City Hall. 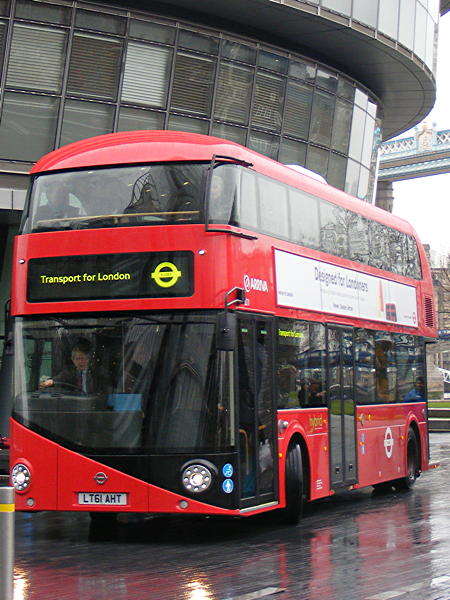 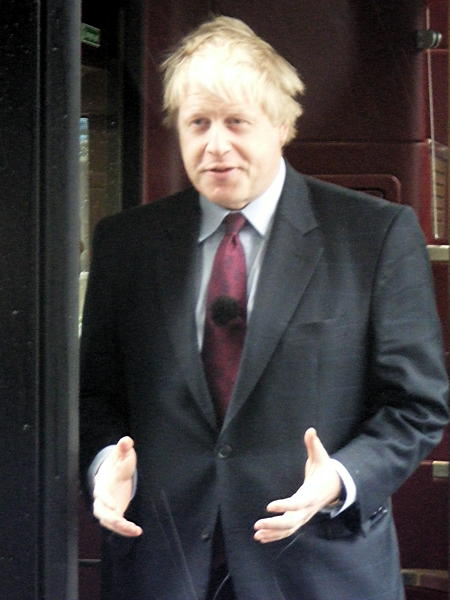 'Any more fares please,' - Boris Johnson on the platform of the new bus

LBC 97.3's Nick Ferrari presented his breakfast programme live from the first prototype bus at City Hall. He was joined by the Mayor who announced that the vehicles will enter passenger service in February next year on route 38 between Victoria Station and Hackney.

After the radio broadcast Boris Johnson jumped in the cab and drove the bus down Weaver's Lane towards Tooley Street.

Transport for London commissioner Peter Hendy looked apprehensive as he stood on the vehicle's open platform while Mr Johnson drove the busload of VIPs and journalists.

Afterward Mr Hendy – who is a former bus driver – gave his verdict on the Mayor's driving skills. "Very good – but a bit cautious," he declared.

As TfL surface transport boss Leon Daniels replaced the Mayor at the wheel, police motorcycle outriders stopped the traffic to allow the bus to swing into Tooley Street.

Due to the roadworks along Tooley Street and Duke Street Hill it took 15 minutes for the bus to reach Borough High Street.

The bus then travelled along Southwark Street – with Mr Johnson waving from the open platform – before crossing Westminster Bridge for a further photo opportunity in Trafalgar Square.

The new bus has been designed, engineered and built by Wrightbus in Northern Ireland with aesthetic design by the London-based Heatherwick Studio.

"Christmas has arrived early in the form of this revolutionary new bus whose gleaming coat of red paint and sinuous curves will brighten the day of all who see it humming along our great city's streets," said Boris Johnson.

"It is the latest, greatest masterpiece of British engineering and design, and I am certain it will become a much loved and iconic vehicle akin to the legendary Routemaster from which it draws so much inspiration."

Over the next few weeks the bus will undergo testing for certification purposes and will be put through its paces by Arriva staff.

Eight prototype buses will enter passenger service in the first half of next year. By March 2012 TfL will have spent Ł9.6 million on the project – more than a million pounds per prototype vehicle.

There are still unanswered questions about how the new buses will work in practice and how they will be staffed. The Mayor has said that the buses will operate during the daytime with a second crew member (ie conductor) on board.

"It is a phenomenal achievement to get a bus of this calibre from the drawing board to the streets of London in just two years and my congratulations goes to all who have worked tirelessly to make this happen," said Peter Hendy.

"This bus has been designed from the wheels up with the complex needs of Londoners in mind; it truly is a 21st century bus.

"It's stylish and comfortable, and will ensure a smooth ride for all on board as well as an eye-catching spectacle for those who will see it glide through the streets of London."

The prototype buses will be trialled in passenger service and the performance and passenger feedback will be evaluated.

TfL says that if the trial is deemed successful there could be hundreds of these buses operating across London in the coming years.

The project's future could depend on the result of next year's mayoral election.