Protesters objecting to the criminalisation of squatting disrupted a Boris Johnson photo opportunity outside City Hall on Monday lunchtime. 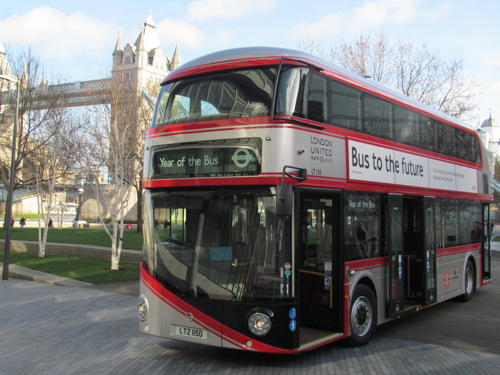 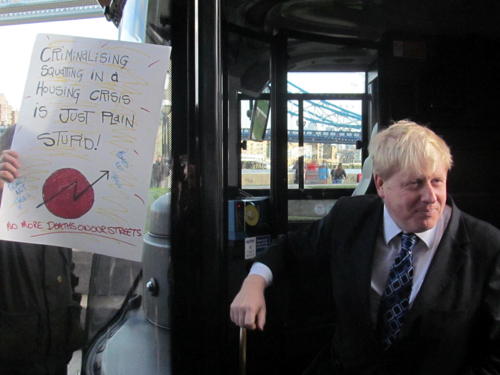 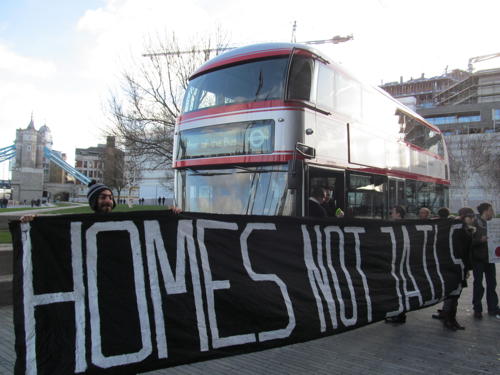 The Mayor was unveiling a 'New Routemaster' bus that has been painted in red and silver livery to promote the 'Year of the Bus'.

A number of significant anniversaries fall this year, including 60 years since the creation of the original Routemaster, 75 years since the launch of its predecessor the RT bus and 100 years since hundreds of London buses were sent to the Western Front to play a crucial role during the First World War.

Transport for London says that the year-long programme of events and activities will celebrate the past, present and future of the capital's bus network.

"London buses are the pulsing red arteries of the capital, 24 hours a day, 364 days of the year and they play an undeniably important role in the city's economy," said Boris Johnson, the Mayor of London.

"The history of London's bus network is a fascinating one, from George Shillibeer's early horse-drawn omnibuses to today's world leading New Routemaster, and this year we will celebrate the central role the bus has played, and will continue to play, in the life of our capital."

Leon Daniels, managing director of TfL's surface transport division, said: "In London people make more than 2.3 billion bus journeys a year – more than are made in the rest of England.

"This year will see a richly-deserved celebration of the humble bus from its origins in the 19th century to today, and also look at what the future holds for this crucial part of London's transport network."

However, other City Hall politicians have warned the Mayor not to be distracted from the real priorities.

Val Shawcross AM, chair of the London Assembly transport committee, said: "We welcome the launch of the Year of the Bus but once the hype and photo opportunities are over, we hope it will serve as a reminder to address the committee's findings about rising demand and overcrowding.

"London has a brilliant bus service with 6.5 million journeys made every day, more than twice the number of tube journeys.

"But, with a projected 167 million more journeys by 2022, we need to ensure the service is prioritised and modernised to keep pace with the growing demand."

The Mayor's flagship 'New Routemaster' buses are due to enter passenger service south of the river for the first time when they are introduced on route 148 from Saturday 15 February.

Although the Mayor continues to tout the open platform with its 'hop-on, hop-off' capability as a key feature of the three-door double-decker bus, industry rumours suggest that the vehicles on route 148 will not have a second crew member on board so the rear doors will remain closed between stops.

The 148 bus route runs from White City to Camberwell Green via Westminster Bridge and Elephant & Castle.

At Monday's event the Mayor confirmed to the SE1 website that 'New Routemasters' would operate without a conductor or attendant on some routes, even at peak hours.

Earlier this month this website asked TfL for a definitive answer on the crew arrangements for route 148 but no substantive response has been received.