New riverside public toilets will open at Jubilee Gardens next month, it was announced at this week's South Bank Forum meeting. 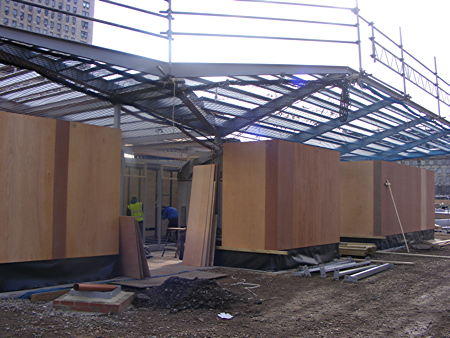 The Jubiloo under construction in February 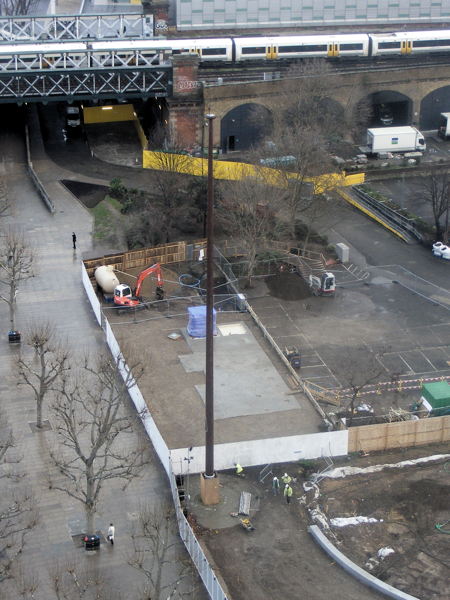 The Jubiloo site in January before the main construction work began

The newly-built conveniences, known as the 'Jubiloo', are situated on The Queen's Walk between Hungerford Bridge and the Jubilee Gardens flagpole.

The Jubiloo's operator, Healthmatic, says that admission will be 50p and facilities will include 12 individually-styled unisex cubicles and as well as a urinal area.

The building, resembling an upturned vessel, has been designed by Clink Street-based architect Mark Power. The roof will act as rainwater harvester.

"Those in need of relief will pass through the pavilion like river creatures swimming in the space beneath a craft's hull," says the architect.

Healthmatic sales director Piers Dibben told the South Bank Forum that one in seven of passers-by "will need the loo". He estimated that over 500,000 people a year will use the facilities.

The gold anodised aluminium roof has led the architectural team, working near Shakespeare's Globe, to reflect on words in Antony & Cleopatra which they claim to be Shakespeare's memory of Elizabeth I on the river:

The barge she sat in, like a burnish'd throne,
Burn'd on the water; the poop was beaten gold.

The opening hours are 10am to 10pm but this could change with demand say Healthmatic. The firm stresses that the staff will be local people recruited in the Waterloo area.

The 'Jubiloo' will be opened by Kate Hoey MP on Thursday 24 May.

Four years ago a House of Commons select committee drew attention the lack of public toilet provision on the South Bank.

• Last year Mayor of London Boris Johnson ruled out a request from Green Party London Assembly member Boris Johnson for the provision of public toilets at Southwark Underground Station. "Installing toilets ... would be prohibitively costly and involve some remodelling of the station to create sufficient space," said the Mayor.