The Garden Bridge project suffered a new blow on Tuesday night when Lambeth councillors ordered Thomas Heatherwick's team to think again about the design of the proposed south landing building and the provision of public toilets. 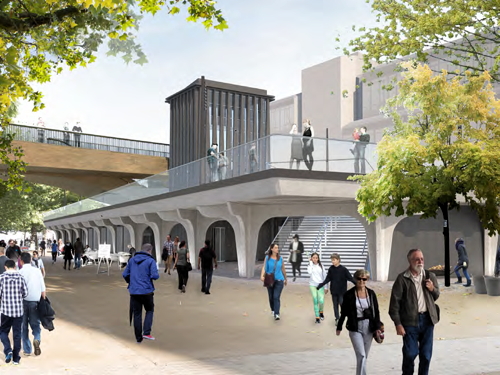 Lambeth's planning applications committee met on Tuesday night to consider whether conditions imposed on the Garden Bridge's planning permission in respect of the South Bank landing building, delivery and servicing, waste management and coaches and taxis had been met.

The committee voted 4-2 to ask the trust to think again about the number of toilets – just eight cubicles – and to replace the proposed unisex toilets with separate male and female facilities.

Committee members also criticised the design of the South Bank landing building, describing it as "bleak", "overbearing" and giving a "stay away from here" message to would-be visitors.

Planning consultant Emma Barnett, representing the Garden Bridge Trust, explained that the trust had "listened and responded to the overwhelming request from [councillors] to include some toilet provision in the south landing building".

She said that eight toilets was more than would be required by the extra visitors to the area generated by the Garden Bridge, so the conveniences would represent "a genuine public benefit to this part of the South Bank".

Philip Hall-Patch of Heatherwick Studio told councillors that the Garden Bridge's south landing building would be "an extension and continuation of the character of the South Bank's mid-century innovations in concrete construction and horizontally expressed terraces and walkways".

He added: "We believe we have designed a building of world-class quality in this central London location..."

The committee heard from three objectors, including Michael Ball of Thames Central Open Spaces (TCOS), who said that eight toilet cubicles "is just not enough" when the South Bank is already a "public toilet desert".

Mr Ball argued that if British standards for public toilet provision were applied, the bridge ought to offer 34 cubicles as well as urinals.

He said that the bridge was expected to have up to 2,500 visitors an hour – "that's the same as a full house at the Royal Festival Hall every hour".

By comparison he said that the London Dungeon has 23 toilets for just 400 visitors an hour.

Gillian Melling, a resident of the Iroko housing co-operative on the South Bank, told councillors that extra traffic on Upper Ground for deliveries and servicing would be "untenable".

She also criticised the "oppressive and ugly" design of the South Bank landing building: "it looks like a bus station and a refuse centre".

Nicholas Timms, a resident of the Redwood co-operative at Oxo Tower Wharf, raised concerns about the servicing and waste management arrangements, some of which will use the service yard next to Bernie Spain Gardens.

All three Labour councillors for Bishop's ward addressed the meeting.

Cllr Jennifer Mosley said that there had been failures in the consultation process both on the part of the Garden Bridge Trust and Lambeth's planning department.

Cllr Ben Kind warned of the prospect of a "grubby deal" between Coin Street Community Builders and the Garden Bridge Trust in respect of how the 'flexible space' in the South Bank building will be used.

Cllr Kevin Craig alluded to the "developing scandal" of the Garden Bridge procurement process and alleged that the planning officers dealing with the Garden Bridge were "operating under a strategic desire by senior Lambeth officers to push this application through at any cost".

Planning officer Sheree Bennett refuted Cllr Craig's allegation, telling the committee that "there is no push from above to get this through".

The committee approved the discharge of conditions relating to deliveries, waste management and taxi and coach management.

Do you think that the Garden Bridge should provide more than 8 toilets?