A new permanent display of mosaic portraits of notable local women has been unveiled at Morley College by the Mayor of Lambeth. 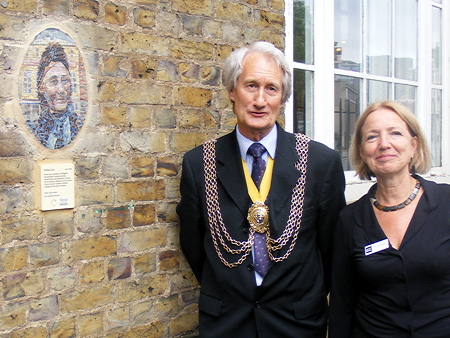 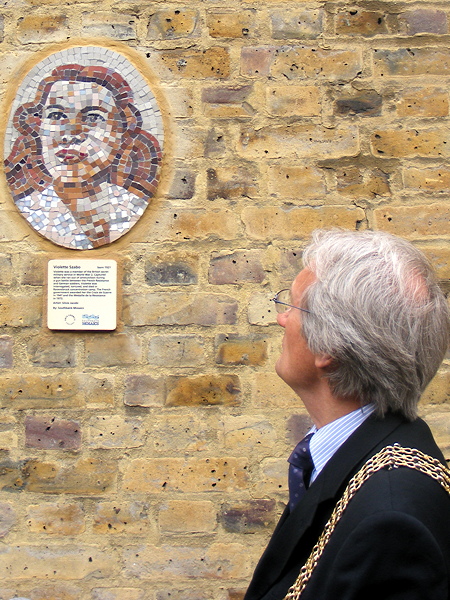 The Mayor admires the portrait of Violette Szabo 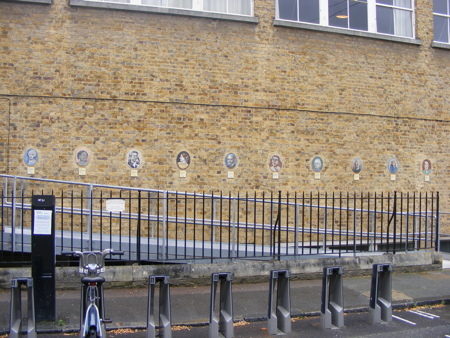 The 14 portraits have been created by artists at the Southbank Mosaics studio in the crypt of St John's Waterloo.

Ten of the portraits can be seen on King Edward Walk and the remaining three are on the college's Westminster Bridge Road facade.

The mosaics showcase pay tribute to pioneering women from a variety of fields including social reformers, a Second World War spy and figures from arts and business.

A portrait of Emma Cons, founder of the noted adult education college, was unveiled by the Mayor of Lambeth, Cllr Clive Bennett, at a ceremony on Tuesday afternoon.

"These are the faces of people who have made a real difference," said David Tootill of Southbank Mosaics.

"The South Bank area has an incredible history of active women working hard to make life better, as well as major institutions connected to the welfare of women, and we are keen to highlight this aspect of our neighbourhood as well as to bring character, detail and interest to our public spaces."

Morley College principal Ela Piotrowska added: "The college is proud of its role in Lambeth, its contribution to adult learning in the borough and we value the opportunity to celebrate some of the shared history of Lambeth and the college through these portraits."

Emma Cons (1838-1912) founded Morley College in 1889 and has been described as a "woman of infinite resource". She also established the South London Dwellings Company and managed Surrey Lodge on Lambeth Road (home to more than 600 people). She was also the first woman alderman to sit on the London County Council, and fought to allow women to serve as local councillors.

Violette Szabo (1921-1945), Stockwell resident who became a member of the British secret military service during the Second World War. She was captured on her second mission and was tortured and interrogated before her execution in 1945. There is a memorial to her on Albert Embankment.

Jude Kelly OBE, theatre director and producer with over 100 productions to her name. She was appointed artistic director of Southbank Centre in 2005.

Octavia Hill (1838-1912), social reformer and a key force (assisted by Emma Cons among others) in the development of social housing in London. She also campaigned for open space, established Red Cross Garden and co-founded the National Trust.

Lilian Baylis (1874-1937), niece of Emma Cons and theatrical producer who revived The Old Vic theatre and Sadlers Wells, as well as founding the forerunners to the English National Opera, National Theatre and Royal Ballet.

Mary Seacole (1805-1881), Jamaican-born nurse, best known for establishing her own treatment centre in Crimea for the treatment of soldiers injured during the Crimean War. After the war she spent several years in London before returning to Jamaica. There are controversial plans for a statue in the grounds of St Thomas' Hospital.

Eva Hubback (1886-1949) was a feminist and suffragette who served as principal of Morley College from 1927. She was also elected to the London County Council and became president of the National Union for Equal Citizenship.

Natalie Bell has managed community projects for over a decade and is a Coin Street Community Builders director. She has been involved with SE1 United since it was founded in 2002.

Margaret Mellor is a Waterloo resident and artist who has played a pivotal role in local campaigns – including Waterloo Community Development Group – for four decades.

Dr Annie McCall (1859-1949) was one of the first women doctors and a pioneer in the fields of midwifery and childcare. In 1889 she established the Clapham Maternity Hospital, the first to be staffed entirely by women.

Caroline Martineau was a scientist, author and principal of Morley College from 1891-1902. Also worked closely with Emma Cons and Octavia Hill.

Hester Thrale (1741 -1821), Streatham resident and a colourful member of London society, known as a diarist, author and patron of the arts. She also had a close association with The Anchor Bankside.

• A small exhibition marking the centenary of the death of Emma Cons can be viewed in the foyer of Morley College until the end of July.