St John's Church at Waterloo has announced plans for a dramatic reconfiguration of the historic building to serve the community better. 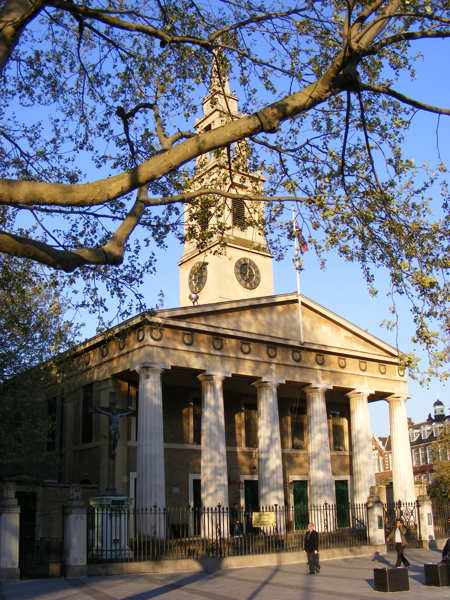 "Waterloo is the most exciting place to be in London at the moment," said priest-in-charge Canon Giles Goddard, addressing the South Bank Forum at Coin Street Neighbourhood Centre on Thursday evening.

"St John's is London's most central church but we are not reaching our potential as a place to serve the community and as a building."

Ideas already suggested include a community cafe, a Waterloo heritage centre and facilities to support older people and carers in the parish. There is also a wish to connect the church entrance beyond the porch with the interior.

The cost is expected to be between Ł8 million amd Ł10 million but Canon Goddard is confident of raising the money.

Canon Goddard was previously vicar of St Peter's Walworth where he led the project to create the InSpire centre in the church's crypt.

Also speaking at the South Bank Forum was Tim Lynch of Eric Parry Architects who, having worked on the recently completed St Martin-in-the-Fields development, has been commissioned to provide a feasability study for St John's.

"We can assure you there will be no loss of green space," he assured the audience after outlining his approach.

Local resident and Futures Theatre Company artistic director Caroline Bryant, who is based in the church crypt, spoke about improving rehearsal and performance space for local people, creating an art gallery where Southbank Mosaics could display work and incorporating better access for people with disabilities.

"We want to really raise the profile of South Bank residents. People often don't realise how many residents there are in this area."

Also revealed were details of the St John's Festival running from 7 to 12 July which is to be a contribution to the Festival of Britain 60th anniversary celebrations. St John's was restored in 1951 as the Festival church and still holds the Festival Bible.

Those appearing at the St John's Festival will include broadcaster Jon Snow and poet Owen Sheers. There are also plans for a 'performed radio play' about Waterloo from World War II to the 1951 Festival of Britain.