The Olympic torch relay made its way through SE1 on Thursday morning from the Millennium Bridge at Bankside to Borough, Bricklayers Arms and the Old Kent Road. 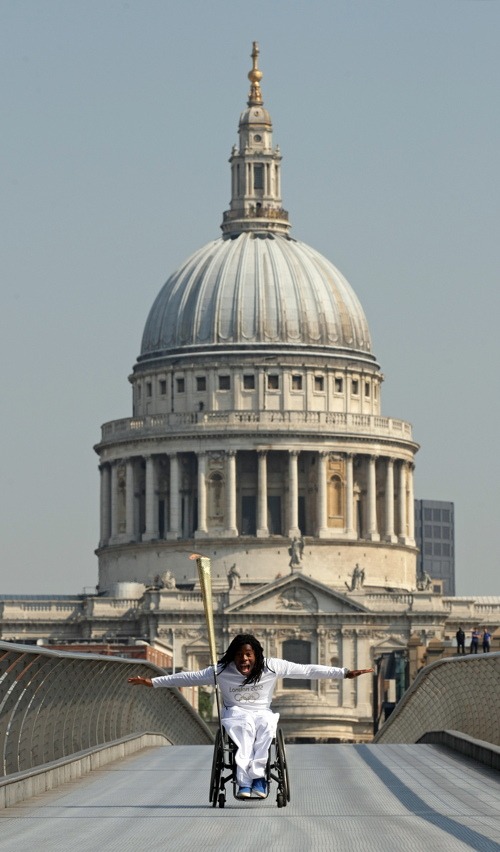 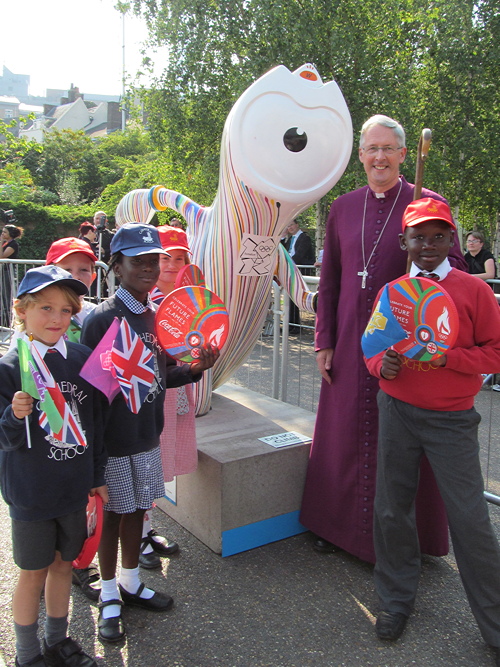 The Bishop of Southwark, Rt Revd Christopher Chessun, with pupils from Cathedral Primary School waiting to greet the torch on Bankside 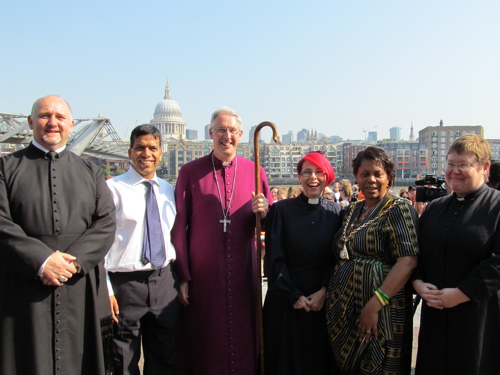 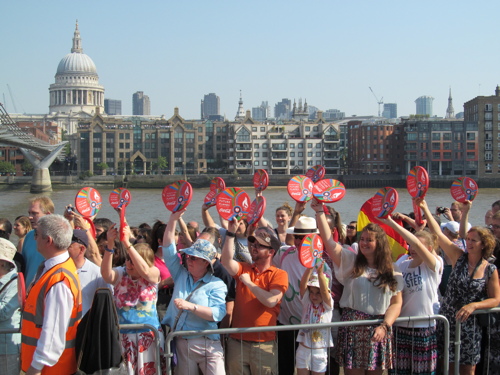 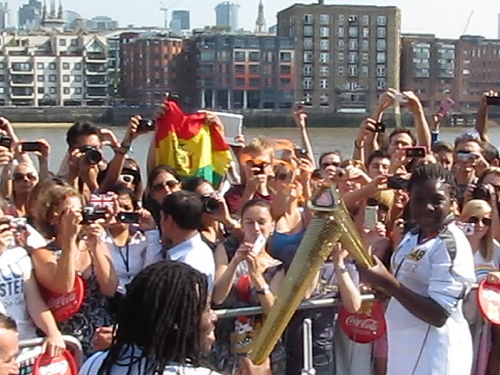 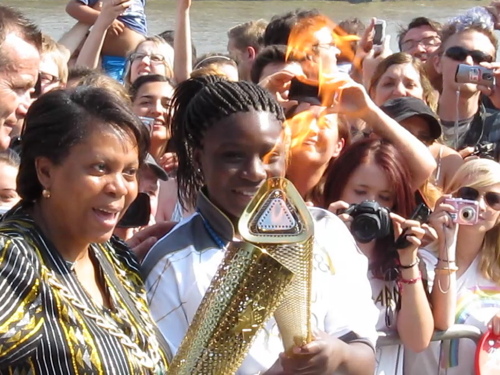 The Mayor of Southwark Cllr Althea Smith and Ify Egesi 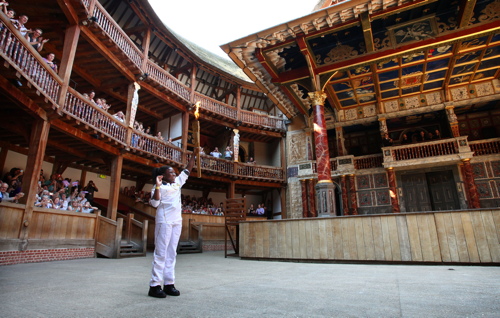 Ify Egesi carries the torch into the yard of Shakespeare's Globe (Photo: LOCOG) 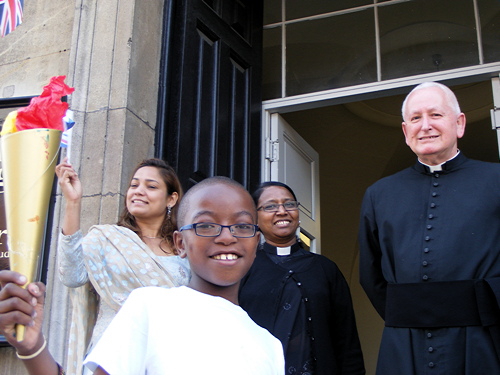 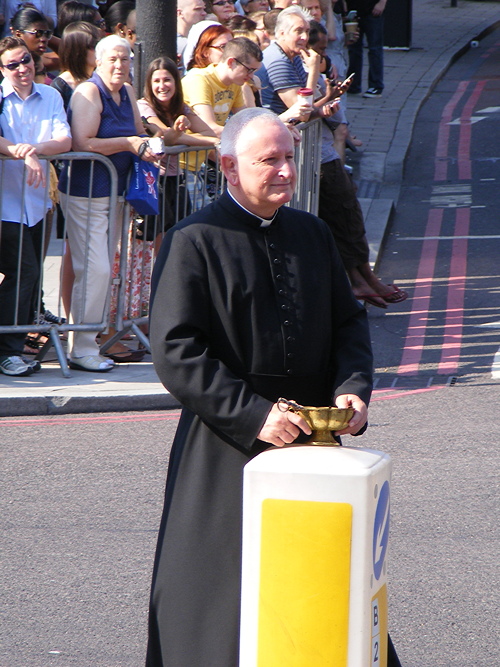 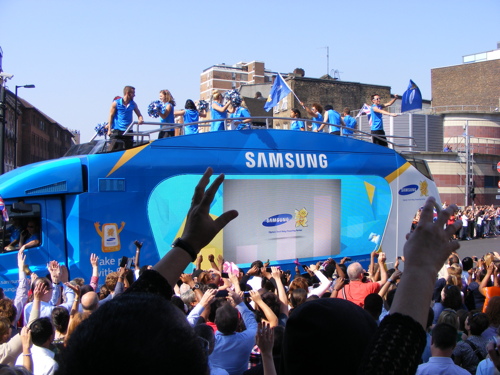 The flame in Marshalsea Road 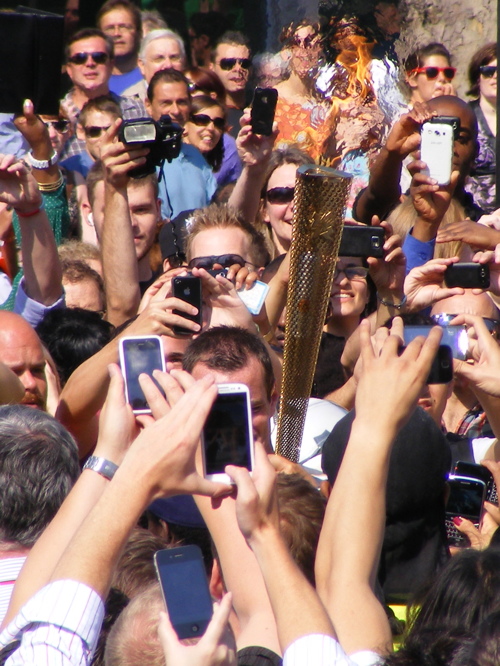 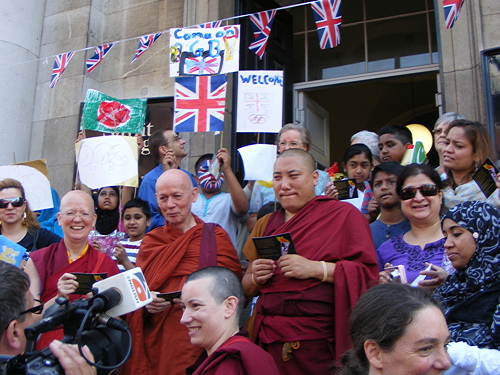 Fr Ray Andrews is interviewed by a Pakistani TV crew 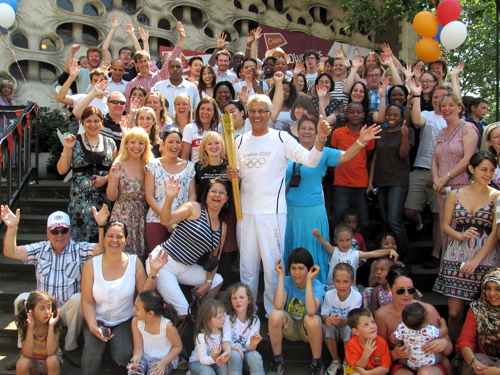 Oasis founder Steve Chalke, who carried the torch in the City of London, arrived back at Oasis Church Waterloo on Thursday lunchtime to a warm reception from friends and colleagues

The flame arrived in SE1 just before 10am when paralympic athlete Ade Adepitan glided across the Millennium Bridge.

On arrival at Bankside he passed the flame to waiting torchbearer Ify Egesi. The Mayor of Southwark, Cllr Althea Smith, and the Bishop of Southwark, Rt Revd Christopher Chessun, were on hand to welcome the relay to the borough and diocese.

Ify, aged 12, was nominated as a torchbearer by Sacred Heart Roman Catholic School in Camberwell. She carried the flame into the yard of Shakespeare's Globe before the relay continued along New Globe Walk and Park Street.

At the top of Great Guildford Street the torch was reunited with its convoy of support vehicles which had travelled to Bankside via Blackfriars Bridge.

The relay continued along Southwark Street, Southwark Bridge Road and Marshalsea Road to Borough Underground Station where it arrived on time at 10.18am.

Bishop of Woolwich Michael Ipgrave and communities minister Baroness Hanham were on the steps of St George the Martyr Church to watch the flame passing.

Parish priest Fr Ray Andrews stood on the central traffic island of Great Dover Street to bless the runners with holy water as the church's bells rang out a welcome.

The event was filmed by Pakistan's Geo television who interviewed Fr Ray and assistant priest Fr Rana Khan who is also the Archbishop of Canterbury's interfaith advisor.

Afterwards onlookers were able to visit the Multi Faith Torch Celebration in St George's crypt where young people from the Rockingham Estate had earlier been making welcome placards and paper torches to wave outside.

The children and teenagers were joined by representatives of several faiths in Southwark – including Tibetan Buddhists from Bermondsey and a Franciscan sister from the Oratory of St Alphege – to make a pledge in the Olympic spirit to strive together for the common good of communities.

"The torch has brought people together," said Baroness Hanham. "Most important will be the legacy which is left. We don't want to forget this coming together of people and communities which has resulted from this torch. You epitomise that here."

Earlier Bishop Michael, who likened the torch handover to the the meeting of communities, said: "We are very committed in the Church of England to that work as are other faith communities here in Southwark."

"Today is a glorious day for Southwark and has really brought a wave of excitement to the borough the day before the opening ceremony of the Olympic Games," said council leader Peter John.

• There is a final chance to see the Olympic flame on Friday when it is carried along the Thames on board the Gloriana royal rowbarge.