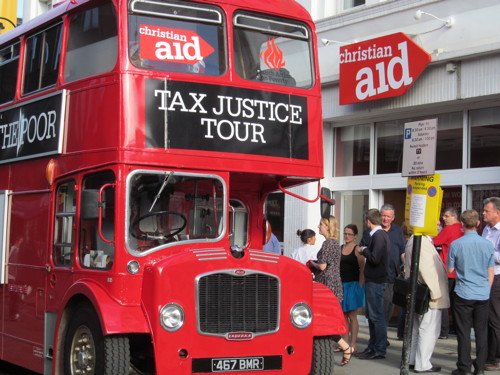 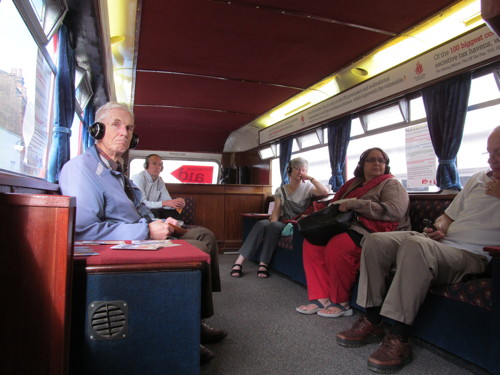 The red bus stopped on Thursday afternoon outside the Christian Aid headquarters in Lower Marsh where staff were waiting on the pavement.

Christian Aid and Church Action on Poverty are running a 'Tick for tax Justice' campaign against tax avoidance and calling on David Cameron to use his global leadership to end financial secrecy so that tax dodgers have nowhere to hide.

"Tax dodging is an injustice that keeps some people poor while others get richer," said the charities in a joint statement. "It robs countries of the taxes they are owed, money that could be spent on essential services such as health, education and welfare. Both the Prime Minister and Chancellor have condemned aggressive tax avoidance as morally wrong."

Shoppers were invited on board to sign a petition calling on the Prime Minister to push for measures requiring companies to report on the profits made and taxes paid in every country in which they operate.

"It's money that could be used to make huge improvements to public services such as healthcare and education, better enabling people to sustain themselves. By making changes to the tax system, people across the world can live healthier, happier and less hungry lives."

The Tax Justice Bus had arrived from Horsham on day 21 of its 53 day tour of the UK and Ireland highlighting how global tax dodging hurting the poor. The first stop was Cheltenham last month for the Greenbelt Festival. The final destination is Manchester on Monday 15 October.

The tour schedule has included a visit to Salisbury where the former Wilts & Dorset vehicle operated during the 1970s. After about forty minutes in Waterloo the red bus was driven along The Cut on its way to St Paul's Cathedral.

A model of the same vehicle can be purchased from the nearby Ian Allan Book and Model Shop.