Southwark Fire Station in Southwark Bridge Road is under threat of closure, according to a leaked London Fire Brigade document. 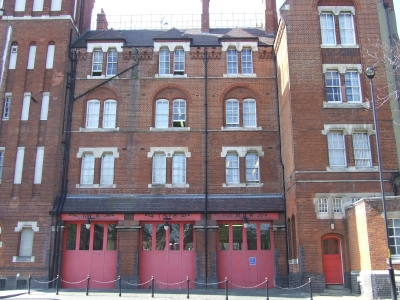 The plans, which could lead to the closure of 17 fire stations, are expected to be put before the London Fire and Emergency Planning Authority next month as fire chiefs try to achieve savings of £65 million over the next two years.

The closure of Southwark Fire Station would enable the fire authority to sell the whole of its Southwark Training Centre complex – including the London Fire Brigade Museum at Winchester House – for private development.

The centre is expected to become surplus to requirements under a new outsourcing agreement with Babcock. The site has been valued at £10 million – a figure likely to increase if developers are not obliged to provide a new fire station as part of any sell-off deal.

SE1's other fire stations at Dockhead and Old Kent Road are likely to be saved because they are subject to a private finance initiative contract to provide new facilities. There are also plans to refurbish Lambeth Fire Station on Albert Embankment.

"These proposals present the biggest threat to the London Fire Brigade since the days of the Luftwaffe and would lead to the decimation of fire cover in London," said Paul Embery, the FBU's regional secretary for London.

"The stations under threat of closure have stood proudly for generations, protecting local residents from bombs, fire and terrorism, yet Boris Johnson is about to hammer a 'for sale' sign on to their front doors.

"Such a huge cut cannot be made without there being an impact on public safety, and we call on Londoners to join with us in defending our fire service.

"All around the country, chief fire officers are beginning to warn publicly of the danger of catastrophic cuts. So far, the commissioner of the London Fire Brigade, Ron Dobson, has remained silent, but surely now it is time for him speak up.

"The London Fire Brigade is a proud organisation with a fine history. But it is now facing possibly its greatest challenge. Its leaders must do the right thing and tell the politicians these cuts are wrong and dangerous. If they don't do it, the FBU will."

The leaked list of fire stations under threat of closure was at the centre of a political row at Wednesday morning's Mayor's Question Time at City Hall.

The list was brandished in the chamber by Labour assembly member Andrew Dismore but fire authority chair James Cleverly urged members to maintain the confidentiality of the document.

A London Fire Brigade spokesman said: "Like virtually every other public service, the brigade is facing the need to make savings. There is a target for these savings but the full details will not be known until at least December, when the Government announces its grant to the brigade.

"We expect to be able to maintain our current target response times. No decisions about any possible fire station closures have yet been taken. Before they are, there will be a full public consultation."