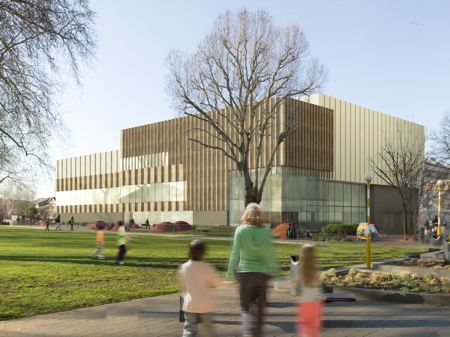 Sport England has lodged a formal objection to the planning application for the proposed new leisure centre because it is concerned that that the new centre will have a smaller sports hall.

The quango argues that studies show that existing sports halls in Southwark are operating at or close to capacity and there is "a clear need for additional sports hall provision".

Sport England says it will withdraw its objection if the plans are amended to include like-for-like replacement of the existing six-court hall or the council provides evidence that other local sports facilities can meet the displaced demand.

Southwark Council argues that its proposals "represent both a quantitative and qualitative improvement in leisure facilities in the area" by replacing the long-defunct swimming pool at the Elephant.

"It's no surprise to hear that Sport England have objected to this scheme," says Cllr Geoffrey Thornton, the Cathedrals ward councillor who has consistently questioned the council's plans to reduce sports hall and squash court provision.

"For nearly two years now local residents, councillors and sports professionals have been raising concerns over the loss of existing sporting facilities without any plans to replace them elsewhere in the borough.

"While the Labour council's decision to sell off much of the site for luxury residential development leaves a reduced footprint available for any new leisure centre, I'm far from convinced that current plans represent the best possible use of space.

"It remains, in my view, a retrograde step to be offering fewer sporting facilities at this site, at the very moment that thousands of residents are taking up new sports having been inspired by the recent Olympic and Paralympic Games."

• The demolition of the existing leisure centre, which closed to the public in June, has been delayed by the discovery of significant archaeological remains.