Londoners from streets, houses and parks with 'elm' in their names collected their specially grown elm saplings at the Conservation Foundation's first Ulmus londinium elm distribution which took place at the Garden Museum on Sunday. 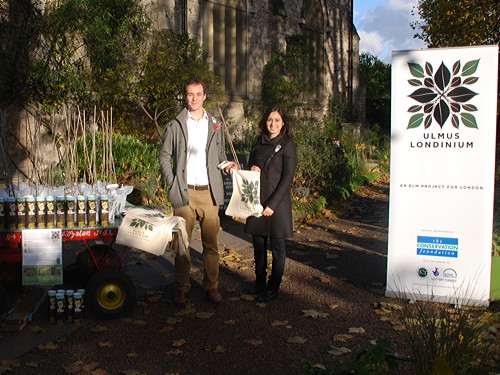 Elm Grove in Peckham, Elm Bank Avenue, Elm Park and the Elmwood Luxury Pet Hotel are among the recipients of the saplings grown as part of the Ulmus londinium programme.

The project, which is supported by the Heritage Lottery Fund, also includes a survey of London's surviving elm population through a Natural History Museum online map and a film on the elm's heritage in the capital.

With the health of Britain's trees under scrutiny after the emergence of ash dieback, Conservation Foundation director David Shreeve said: "We are very fortunate in this country to have a rich and diverse tree population but any loss within its biodiversity is to be regretted.

"That's why after the loss of over 20 million elm trees the Conservation Foundation continues to work with possible disease resistant trees in the hope that we can find replacements for some of those lost. It is important to maintain a rich biodiversity of trees for, like people, trees have unique qualities and uses."

The Conservation Foundation is offering a free sapling to any Londoner who lives in a place with 'elm' in its name and would like to bring back some history and biodiversity (the elms supports a rich biodiversity including the White-letter Hairstreak butterfly).

More distributions will follow, a number of high profile plantings will also take place and parks and local authorities are to be offered elms.

Micropropagated from healthy mature parent elms found growing in the British countryside and monitored by the foundation, the London saplings were grown at at the Kennington environmental and education charity Roots and Shoots.

They are part of The Great British Elm Experiment, a UK-wide programme of the Conservation Foundation.

Some of the saplings have spent the summer at Lambeth Palace having been delivered by local school children in May this year.

"We want to interest a new generation in the elm, so much a feature of the British life and landscape for centuries and also to try and find out why some trees survived Dutch elm disease," said David Shreeve.

"So many have disappeared over recent years that we can only hope to replace some. But rather than just give up and forget the elm, we think it's worth a try."