Plans for the redevelopment of Dockhead Fire Station have been approved unanimously by a Southwark planning sub-committee. 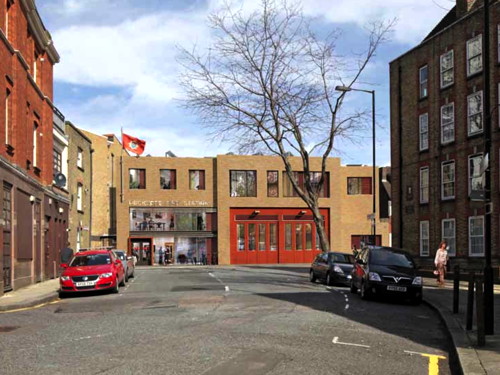 More than six years have passed since the London Fire Brigade announced that it would rebuild Dockhead Fire Station as part of a private finance initiative (PFI) deal.

The 1920s building is familiar to millions of TV viewers as it was used as a filming location for the long-running ITV drama London's Burning.

In 2009 councillors reluctantly approved Jacobs Architecture's design for a new fire station even though the then planning committee chair described the proposals as "pretty woeful" and "truly awful".

That planning permission has now lapsed and a new scheme by BDP was presented to councillors last week.

"It has given long service to the local community and to central London more generally since it was built in 1929.

"It occupies a good site in terms of the amount of space available and it is in a good location for us to attend fires and other emergencies in the community.

"As you might expect from a building that's 84 years old, the station building itself has many drawbacks.

"Aside from the maintenance issues of an old building, it was designed when fire engines were considerably smaller than they are today, when the staffing and training requirements were very different and before we began to provide public engagement and education work."

The new building will include a room which will be available for community meetings and events.

At the end of last year Southwark planning officers granted permission for the rebuilding of Old Kent Road Fire Station which is being redeveloped as part of the same PFI deal.

Demolition of the existing Old Kent Road station is due to begin this summer. Its two fire engines will be temporarily relocated to Deptford and New Cross, with the aerial fire appliance moved to Dockhead.

Once the new fire station at Old Kent Road is rebuilt, work will start at Dockhead with the fire engine from that station also being moved to Deptford until the completion of construction work, scheduled for the summer of 2015.

Approval of the Dockhead Fire Station scheme comes in the same week that firefighters protested outside brigade headquarters against plans to close a dozen London fire stations, including Southwark Fire Station in Southwark Bridge Road.