The Contiki Tours coach depot next to the railway bridge in Lambeth Road may be replaced with a student accommodation block. 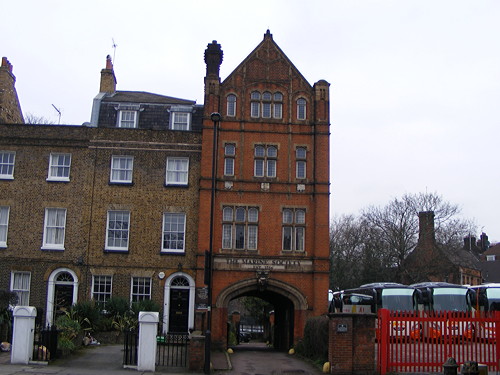 Student accommodation developer Downing is preparing a planning application for a residence for around 100 students along with retail space.

The site is next to the Victorian gatehouse entrance to the Marine Society headquarters at the end of a listed Georgian terrace. The opposite end of the terrace is bookended by Lambeth Rectory which is also Georgian.

Addressing Waterloo Development Community Group's January meeting, architect John Tudor of HFBT said that the proposed six-storey building was intended to "fit into the the context of the terrace".

He added: "Our new building follows the spirit of the Georgian buildings. The height is restricted to the of the height of the mansard of 204 Lambeth Road next to the Marine Society."

The architect said that he had been advised that the view from Archbishop's Park would be enhanced by the filling of the gap.

The ground floor is designed to allow for a lounge, office and retail space. A community use might be included in the building or one of three railway arches included in the property.

One arch is vacant but a new site for the coach park has yet to be found.

A consultation exhibition was held at the nearby Novotel London Waterloo last month. Discussions with Lambeth planning officers are due to be resumed this month. A planning application is expected later in the year.

The Lambeth Road, Carlisle Lane and District Residents' Association has already vowed to fight the "cheap and nasty box-like development".