Actor Hugh Grant and former chancellor Lord Howe of Aberavon were among guests at a party to mark Simon Hughes' 30 years as a Southwark MP. 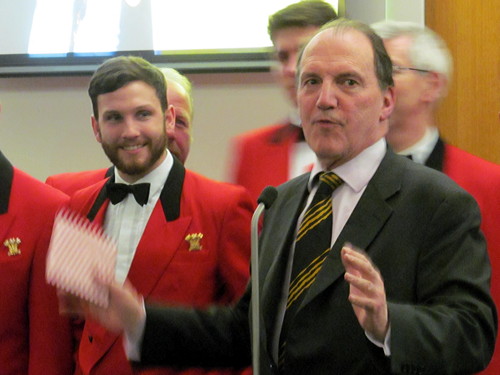 The reception, in the House of Commons' Attlee Suite in Portcullis House, was held on Tuesday evening when Parliament rose for the Easter recess.

It was 30 years almost to the day of Simon Hughes' maiden speech made during the 1983 Budget debate.

"When I made my maiden speech in Parliament 30 years ago this month, following the budget debate in 1983, Geoffrey Howe who is now my constituent, was the chancellor," recalled Simon Hughes.

"Parliamentary giants, such as Jim Callaghan and Edward Heath, had spoken earlier day in the same debate.

"In many ways 30 years has been a very long time in politics yet in some ways it has passed as quickly as a dream, with only the occasional nightmare episodes on the way."

He said that in his first speech he committed himself to increasing opportunities for jobs and training in Southwark and to fighting the national battle to reduce the gap between the rich and the poor.

"When Liberal Democrats entered government in 2010 for the first time in my lifetime sadly the gap between the rich and the poor had widened to its greatest ever since the 1920s.

"Happily unemployment has dropped from nearly 20 per cent in 1983 to under 7.5 per cent now, although that is no reason for complacency and the whole government, all Liberal Democrats and I are determined to increase employment and decrease unemployment for women and men of every working age."

Looking ahead, the MP called on the Liberal Democrats to focus on affordable housing, skills, and the redistribution of wealth as the party starts to put together the manifesto for the 2015 general election.

"I have no plans or desire to be an MP in 30 years time but for the next part of my privileged time in parliament as the MP for the great constituency of Bermondsey and Old Southwark I repeat my commitment to work for all my constituents," said Simon Hughes.

Earlier the MP paid tribute to London Fire Brigade's Southwark borough commander Andy Snazell for the work of his colleagues who were still on site tackling the fire at the old Southwark town hall in Walworth Road.

A letter of congratulation was read from neighbouring MP Kate Hoey who said that they had been able to work well together on cross-border bodies such as the South Bank Forum.

Commons speaker John Bercow, proposing a toast to the Bermondsey & Old Southwark MP, praised his hard work and added that over three decades Simon Hughes had shown "an obviously natural, uncontrived and relentless passion for fairness and for justice".

The London Welsh Male Voice Choir performed during the evening.

• Earlier this year Simon Hughes shared a stage with Peter Tatchell, his Labour opponent in the controversial 1983 by-election, to share memories and lessons from the historic contest.