A special presentation was made to Mayor of Southwark Althea Smith on board the Golden Hinde last week to mark the close of her mayoral year. 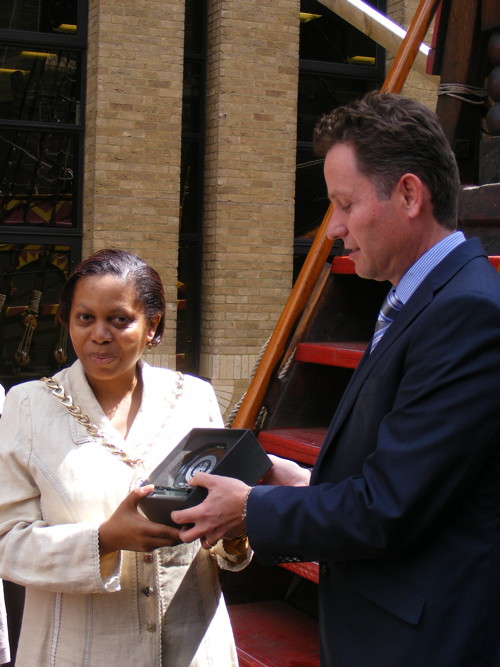 "We thank her for her service not just to the Golden Hinde but to the community as a whole," said Golden Hinde II general manager Troy Richards at St Mary Overie Dock last week.

"She became a sailor" by acting as a patron for the Golden Hinde Trust, he added.

Trustee Martin Crawford-Brunt presented the mayor with an souvenir award and flowers.

The mayor said that the Golden Hinde was now an educational tool to be enjoyed by families.

Reflecting on her year in office, Cllr Smith stressed that she it had been an enjoyable time with such highlights as going to her place of birth in Jamaica and meeting Prince Harry.

The reception was one of several special events being held during the ship's 40th anniversary year. The first Golden Hinde was built during Elizabeth I's reign and carried Sir Francis Drake to north America in 1577. It was the Tudor queen's wish that the ship should become a maritime museum but it was left to deteriorate at Deptford.

The Golden Hinde II replica was built at Appledore in Devon and, Troy Richards said, had twice circumnavigated the globe before docking at Southwark.

Present from neighbouring authorities were the Lord Mayor of London Roger Gifford and Mayor of Lambeth Mark Bennett.

Other guests included Southwark Cathedral honorary canon Ivelaw Bowman who has been the mayor's spiritual adviser for the year.

Cllr Smith relinquished the mayoral office on Wednesday night at a ceremony at the council's Tooley Street headquarters. She is succeeded by Cllr Abdul Mohamed.