The Mayor of Southwark and representatives of the armed forces signed a community covenant at a ceremony held at the council's Tooley Street headquarters on Thursday night. 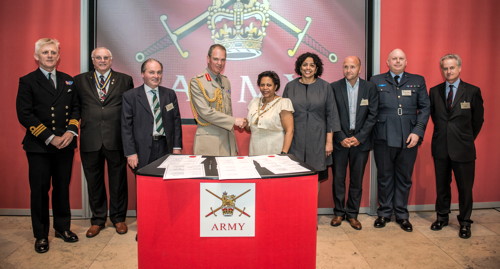 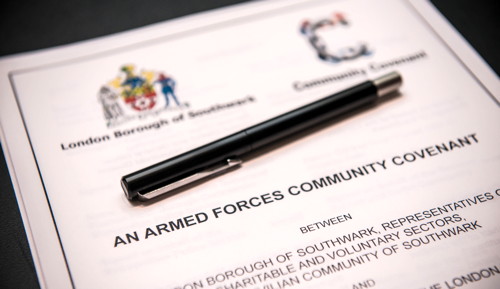 Southwark is the 21st London borough to sign a voluntary statement of mutual support between a civilian community and its local armed forces.

The community covenant is intended to complement the Armed Forces Covenant, which outlines the moral obligation between the nation, the Government and the armed forces.

The covenant is intended to encourage residents to support the armed forces based in their area, nurture public understanding and awareness of the issues which affect those in the forces and their families, and recognise the sacrifices and challenges faced by them.

The agreement also seeks to encourage activities which help integrate the service community into local life and for them to help support the wider community through events and joint projects.

Now that the covenant has been signed, groups and organisations in the borough will have access to government grants of between Ł100 and Ł250,000 to fund projects to help strengthen ties between the armed forces and the wider community.

Southwark Council will also be able to apply for funding through the scheme to help extend initiatives for the armed forces community, such as greater access to housing, transport, health and childcare.

There are a number of military units and detachments in the borough, not least 256 Field Hospital Royal Army Medical Corps, which regularly has personnel serving on frontline operations.

The covenant was signed on behalf of the borough by the Mayor of Southwark Cllr Althea Smith, Major General George Norton, officer commanding the Household Division and the Army's London District, and by other representatives of the armed forces, as well as voluntary and charitable organisations, Southwark's business community, the NHS and emergency services.

"The ceremony gives the whole borough a chance to publicly display the immense pride we share for those who currently serve in the forces, and for all ex-servicemen and women," said Cllr Smith.

Cllr Ian Wingfield, deputy leader of the council, added: "I'm delighted that Southwark is signing the armed forces community covenant and demonstrating our commitment to the forces.

"They deserve our support and this covenant will play an important role in ensuring that happens and those Southwark residents who volunteer to service in our military."

In reply, Major General Norton said: "On behalf of the armed forces, our reserves, veterans and the cadet movement, I thank the Mayor and the council for the wonderful support you are showing to the forces.

"Southwark has contributed so much to the defence of the realm and today is a remarkable event – you are the 21st London borough to sign the covenant and this sends a clear message to those who serve amongst you and defend us, that you recognise the key contribution that they make, especially those on operational service.

"We are indeed fortunate to have so many of Her Majesty's armed forces based in Southwark."

• An armed forces parade is due to be held in Southwark on Sunday 30 June, the day after the national Armed Forces Day.