Lambeth's Labour leader has written to the justice secretary calling on the Government to make squatting in commercial buildings a criminal offence, citing a case in Waterloo where damage caused by squatters cost more than £100,000. 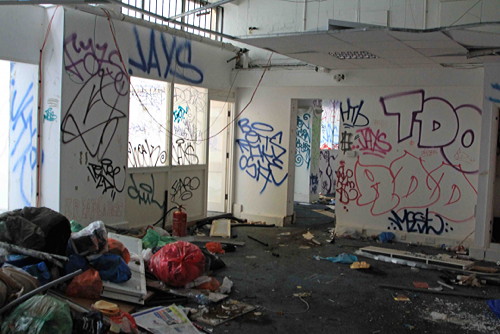 Inside Costain House in Westminster Bridge Road after the eviction of squatters. Photo courtesy of The Sheriffs Office

The letter calls on the government to make commercial squatting illegal, saying: "The change in the law last year to criminalise squatting in residential properties has brought a welcome relief to homeowners in Lambeth.

"Unfortunately, the problem of squatters for commercial property owners has since worsened, and Lambeth has seen an increase in the number of squatters now specifically targeting non-residential buildings.

"We are writing in support of a change to the law to cover commercial properties, and I am pleased that you are sympathetic to this cause."

Cllr Peck's letter cites the case of Costain House at 111 Westminster Bridge Road: "The building's assets were quickly removed and sold. There was one allegation of rape, a series of violent assaults and an attempted suicide during the eight-week duration of the squat.

"Costs to the developers are estimated to be Ł100,000 plus. The impact on the local community was devastating, with the local councillor referring to it as 'the worst case of squatting in 19 years on the council'.

"The policing to support the warrant to evict had to include the territorial support group and costs to Lambeth police have been significant."

Bailiffs from The Sheriffs Office used 43 enforcement officers to remove the 20 squatters from the building in Junw this year.

Costain House is owned by Marlin Apartments which plans to replace the block with an apart-hotel.

The only Lambeth MP not to sign the letter is Vauxhall's Kate Hoey who, asked by the BBC's Sunday Politics London programme whether she supported Cllr Peck's campaign, replied: "No I don't."

She added: "I think it's a very easy thing to come out with but I genuinely do believe that mostly the people are what I call 'good squatters' who have sometimes made arrangements with commercial companies where buildings have been left empty for a very long time.

"The housing situation in London is shocking. Young people, students and people who are low paid just cannot get places to live.

"Rather than going for that legal framework, we should be looking at ways where the owners of those buildings are encouraged to enter in to short term agreements that people will leave as soon as they need the building.

"You cannot justify office buildings sitting empty for long periods of time and people not being able to use them."