Copyprints, for over fifty years on the site of the Tabard Inn near London Bridge, has moved to the southern end of historic Borough High Street. 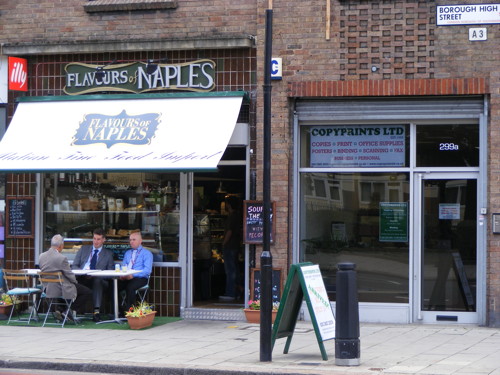 It is now found close to the crossroads with Great Suffolk Street and Trinity Street junction and next door to Flavours of Naples. The shop, number 299a, until recently sold furnishing materials.

The Borough's printing and copying needs were first met by Copyprints in 1959 when well-known local resident Jack Hames founded the business in Talbot Yard. The site is marked by a blue plaque to Geoffrey Chaucer which was unveiled a decade ago by film director and former Monty Python team member Terry Jones.

Jack Hames died in 2009 and this summer's move has been masterminded by John Wheeler.

"We are delighted that, after providing a service for over 50 years locally with the continued patronage of our customers old and new, we look forward to a Copyprints presence into the future," says John.

Copyprints is associated with many familiar publications including 'in SE1', guides read overseas as well as booklets, documents, leaflets and invitations. Just as welcome is anyone wanting a single photocopy. Medical students have long relied on Copyprints to bind a thesis quickly as a deadline approaches.