Plans for a 218-bed apart-hotel in Westminster Bridge Road have been approved by Lambeth councillors. 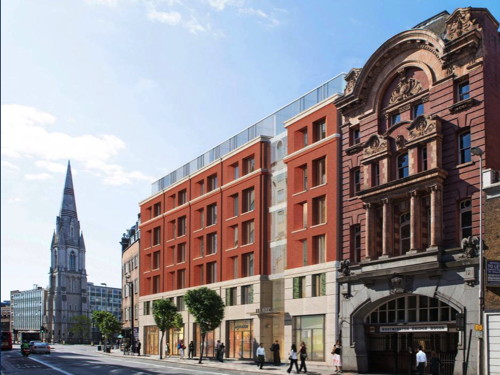 The scheme is a revision of a development approved three years ago. The height and bulk of the proposed buildings are the same, but revisions include an increase in the number of bedrooms, a reduction in office space and a redesigned facade.

"We consider that the proposed new design is an improvement," said planning officer Helen Miles.

The committee heard from representatives of CP Hart, which has a bathroom showroom in Newnham Terrace, who were concerned about the "significant impact" of construction traffic on its business.

All vehicles involved with the demolition and building phases will use Newnham Terrace.

"Whilst my client welcomes the regeneration benefits of the proposal, it is not considered that this should be at the expense of the livelihoods of the existing businesses," said planning consultant Julian Sutton.

Kevin Ohle of CP Hart said that the company had been based in Waterloo since 1979 and 40 per cent of the firm's annual sales of £29 million are made through the Newnham Terrace showroom.

"Without Waterloo, we wouldn't be in business," he said. "We stand or fall if that showroom succeeds."

Mr Ohle said that easy access and parking was crucial to the viability of the company.

He added: "We love the idea of the area being upgraded, but we're scared about what the two-year construction period will do to our business."

A representative of Marlin Apartments told the committee: "111 Westminster Bridge Road will be the flagship building for Marlin and one that we will be immensely proud of."

She added that the scheme is fully financed and work will start as soon as planning permission is granted.

"The scheme represents a major improvement to the design for which we already have planning permission.

"A green wall has been added; a green roof; the top floor has been made much lighter in appearance; glazed coloured bricks have been included; window recesses; increased light; a more modern design.

"Our team is excited about this development and, working with the local community, we are in this for the long term."

Marlin Apartments currently runs its London-wide network of serviced short-stay apartments from its base at Empire Square in Long Lane.

Costain House was recently in the news when Lambeth Council highlighted the £100,000 cost of removing squatters from the building.