Millennium Bridge could turn green and yellow for World Cup

The Millennium Bridge could be lit with the colours of the Brazilian flag for two weeks this summer during the build-up to the football World Cup. 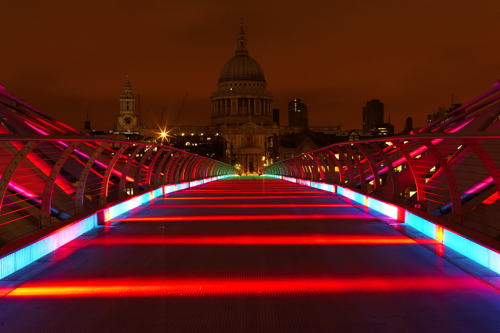 Special lighting on Millennium Bridge during the London 2012 Olympics

New lighting was installed on the Millennium Bridge and other central London river crossings for the London 2012 Olympics.

A report published this week by the City of London Corporation reveals that the Brazilian embassy has approached Guildhall bosses with a plan to turn the bridge green and yellow in the run-up to the World Cup which opens in Brazil on 12 June.

The proposal, which is supported by City Corporation officers, would be funded by the Greater London Authority or the Brazilian Olympic Authority as part of the hand-over of Olympic and Paralympic host city status from London to Rio.

The report, which was prepared for members of the Square Mile's streets & walkways sub-committee, also notes that since the Olympics the City has received a number of requests to change the colours of the lights on Thames bridges for both commercial and charitable events.

"These requests have thus far been resisted, typically to prevent the commercial exploitation of the bridges, but no formal policy has been approved by members on what events should be considered and when," says the report by Guildhall officers.